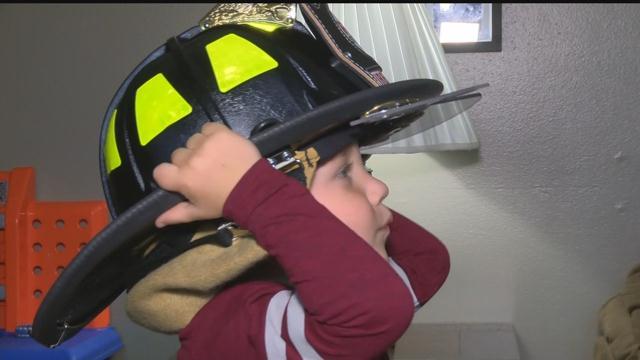 In the town of Delafield a firefighter and his three-year-old son are having a shared experience no one would wish for. Both have been diagnosed with brain tumors and critical treatment lies ahead for the young child especially.

Nicholas Stacey and his three-year-old son Brayden have found support in the firefighting and emergency responder community. But even with all that help the family says they're still finding themselves at a scary crossroads.

But step into their home as a visitor and you'd never know their anxiety.

"The living room, you can barely move when they're playing, there's so many toys and trucks out that it's hard to walk through the living room," Sarah Stacey, Brayden mother, said. She watched her husband and son play on the carpet as she held her 4-month-old son Beckham.

Looking over all the firefighting-related toys, Dad is clearly an influence for Brayden. As a town of Delafield firefighter Nick Stacey regularly takes Brayden to the station.

"If he could be a firefighter right now, he would. We go to the fire department. He plays on every truck," Nick said.

But this past summer, Nick says playtime often turned to pain.

"Usually when I'm cleaning up in here he'll jump on my back and want a pony ride so I would bounce him around. Well that time when I bounced him he started crying and grabbing his head which we felt was really abnormal," Nick said.

Brayden would be diagnosed with a brain tumor. A permanent catheter would be put in his head. Stitches still heal on Brayden's head.

Surprisingly, this was not the first time around for a brain tumor in this family. Nick remembers his own experience in 2014.

"Part way to the pharmacy I said I just didn't feel right. I had her pull over and I opened the door and that's the last thing I remember. I was face down on the side of the road," Nick said.

Nick had serious surgery and he says he has recovered. Brayden was one-and-half at the time.

"We knew that Nick's [tumor] was random and once we found out about Brayden that was actually one of our first questions was was it genetics," Sarah Stacey said.

It wasn't. But that's not much consolation for Nick.

"You know, I'm his firefighter dad. I help everyone and for him to look at me, and I know he has this, and I can't help him is just heartbreaking," Nick said.

"I'm his hero but I can't help him with this. And it breaks my heart. I've had nights where I laid there right next to him and prayed that God would give it to me so he doesn't have to go through it. But he does have to. It's horrible," Nick said.

There is a fund set up for this family at Landmark Credit Union under the name "Brayden Stacey".

There is also an upcoming bowling fundraiser on October 29 at Sunset Bowl in Waukesha.