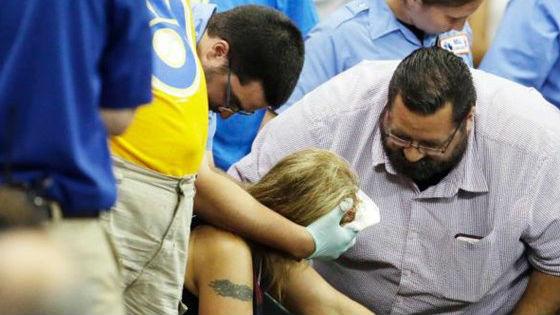 It was three weeks ago that a woman suffered severe injuries when she was hit by a foul ball at a Brewers game at Miller Park. Monday night we spoke with the woman’s daughter for an update on her struggle to recover.

Laura Turek was excited the day it happened. On Facebook she posted pictures stating her excitement at how great her seats were.

Tragedy struck in a split-second and the effects will last a lifetime.

“She has three fractures…she can’t feel the majority of the left side of her face and her gums are even numb,” says daughter Alyssa Turek.

It was July 6th, in the ninth inning at Miller Park. The Atlanta Braves Eury Perez lined a ball over the Brewers dugout traveling about 100 mph when it hit her.

Turek spent several days in the hospital. Had surgery on the 15th to put a titanium plate in her head and she still needs 24-hour supervision.

“We have a couple of different specialists looking at her eye, they say they’ve never seen anything like this,” Alyssa says.

Both the Brewers and the Braves have been very supportive sending flowers, memorabilia and tracking Turek’s updates.

It’s been a dangerous summer in the stands at major league ballparks. The MLB is looking at extending the protective netting behind home plate, something you might think the Turek’s fully support, “yes and no…netting, I’ve seen a lot of comments about that, I think it would ruin the experience,” says Alyssa.

Alyssa says her mom is a huge Brewers fan and that will never change, but so much else in Laura Turek’s life will never be the same.

“My mom said she would go to a game again if she got to sit in box seats, she wouldn’t sit that close again,” says Alyssa.

Laura Turek is not working, and with no timetable to return to work right now, the medical bills are estimated at more than $200,000.

The family has set up a fundraising page which can be found here.