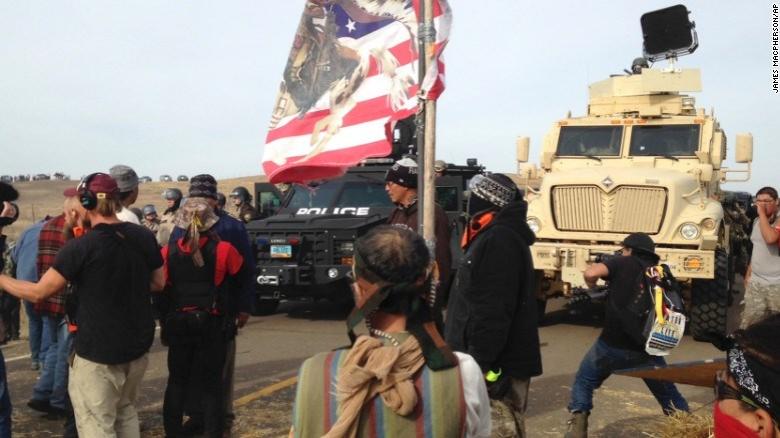 The heavy police presence on Thursday and the multiple arrests -- at least 141, according to Morton County Sheriff Public Information Officer Donnell Hushka -- mean that while the protest is not over, it is unlikely that large numbers will quickly be able to regroup.

Supporters of the Standing Rock Sioux Tribe had earlier set up tents and teepees on the land, which they said belongs to the tribe under a 19-century treaty.Around 200 others were pushed back around two miles to their main encampment. It had taken the law enforcement coalition, with badges from a number of different counties, states, agencies and jurisdictions represented, around six hours to physically push the protesters back to their campsite.

By midnight Thursday some of the more dedicated opponents of the pipeline had already sneaked through police lines and relit fires near the site.

Around 50 cars -- anything not painted in the livery of one of the myriad law enforcement agencies -- were towed away. A handful were either burned or otherwise vandalized.Many of those who were picked up by police were not members of the tribe.

"I've never been arrested before but this is a right cause, this pertains not only to indigenous rights but water rights," one told CNN affiliate KFYR. "I think it's important to everybody to maintain the purity of our water."

At least one person was injured, KFYR reported. The extent of the injury was unclear.

Police in riot gear faced off with protesters on horseback as the months long protests over the pipeline came to a head Thursday.

Dozens of protesters were arrested -- mostly accused of trespass -- after law enforcement Humvees and helicopters began to flood the area to break up an encampment near the pipeline's path.At least two people were arrested for allegedly firing gunshots; one on Highway 1806 near officers and another near a bridge north of the protester's main camp.

"Most of these people are peaceful, prayerful people," Fong said. "But we know that there is a faction that is willing to do anything to stop this pipeline. That's why our people went down there prepared."By Thursday evening, law enforcement had cleared the area and pushed protesters about a mile down Highway 1806, to the site of a previous encampment. Law enforcement lingered in vehicles from different agencies as trucks towed burned cars.

The long-brewing standoff stems from construction of the 1,172-mile pipeline, which protesters said will threaten the environment and destroy Native American burial sites, prayer sites and culturally significant artifacts. Opponents also cite environmental concerns, including possible contamination due to breaches and eventual greenhouse gas emissions.Both sides have accused the other of increasingly aggressive tactics, from police strip-searches and violence, to protesters destroying construction equipment.

The conflict has become a celebrity cause, drawing the support of actors Shailene Woodley, who was arrested in an October 10 protest, and Mark Ruffalo, who provided infrastructure for the camp, including solar panels.

Ruffalo told CNN's Jack Tapper that he did not witness violence when he visited there, but he heard stories from people who claimed they were thrown in jail naked.Protesters are trained in peaceful resistance, he said. No one is allowed in the protest area without training.

"The mantra of the place is 'it's not the police, it's the pipeline that we're protesting or protecting ourselves against.' They spend basically the entire day doing prayers, chanting. I've never been around so peaceful a stand."After the pipeline is completed, it would shuttle 470,000 barrels of crude oil a day, developer Energy Access Partners said. That's enough to make 374.3 million gallons of gasoline per day. From Illinois, the oil could go to markets and refineries across the Midwest, East Coast and Gulf Coast.

Depending on who you ask, the results could be an economic boon that makes the country more self-sufficient or an environmental disaster that destroys sacred Native American sites.

Supporters say it would significantly decrease American reliance on foreign oil and free up railways to transport crops and other commodities.

The Standing Rock Sioux tribe and its supporters say pipeline construction will destroy burial sites, prayer sites and culturally significant artifacts. The tribe sued the US Army Corps of Engineers after it approved the project.

But an advocacy group says the tribe's claims are misleading, saying the pipeline "does not cross into the Standing Rock Sioux Tribe's reservation."