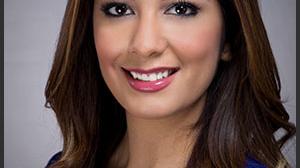 Cristina comes to Telemundo Wisconsin from an internship with Telemundo Chicago. Cristina spent her childhood living in the Midwest and Mexico. Her childhood education was bilingual, which is what led her to achieve a clear grasp of the Spanish language at such an early age. She discovered her passion for TV as a young child. Cristina remembers watching the news when she was a little girl imitating news reporters and anchors.Her first encounter with a camera was at age 17 with local television stations doing commercials and local entertainment news.

After graduating Cristo Rey Jesuit High School she was accepted to complete a Communication Degree at DePaul University. Cristina left the US and expanded her education overseas as well. She studied a semester at Universidad Complutense in Madrid in order to perfect her Spanish so she could be a well-prepared Spanish-speaking journalist.

When she returned Cristina landed an internship with NBC-Telemundo Chicago. Her on-air debut was when she covered the 2012 Venezuela Presidential Elections as a correspondent for a Venezuelan television channel, which she described as the following: \"It was a challenging news story but I tried my best and pulled through, I am proud to say I was only 21 years old and managed to cover politics, since it such a tough topic that takes years to prepare for. I'm excited for what the future holds.\"

She continues to pursue her educational and professional dreams so that one day she can give back to others.