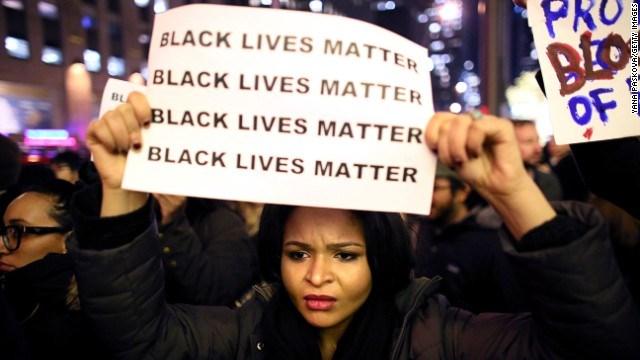 If you're white, you may be able to shoplift, drive drunk, even shove a police officer -- and not suffer the same consequences a black person might, according to trending stories being shared on social media.

#CrimingWhileWhite became Twitter's highest trending topic in the United States and a trending topic worldwide as protests continued Thursday morning over a New York grand jury's decision not to indict a white police officer in the chokehold death of Eric Garner, a black man suspected of illegally selling cigarettes on the sidewalk.

Garner's case also catapulted other hashtags into prominence in the Twitterverse, including #ICantBreathe, a reference to Garner's last words.

An attempt by the New York Police Department to acknowledge the anger also generated a storm online. The department said on Twitter that it wanted to rebuild public trust, in a post that included #wehearyou.

Meanwhile, many people identifying themselves as white posted tweets confessing to crimes they said they committed without getting punished. Each specific account could not be verified independently and immediately. Taken as a whole, however, they paint a portrait that suggests a racial double standard by American law enforcement.

\"I shoplifted when I was 14 and they let me go because my parents came down and we 'looked like a nice family,'\" wrote Joel Watson, a cartoonist.

Allison Brown, an editor, tweeted \"Tonight, black protester & I both ignore barricade & walk in street. 4 cops pounce on him; I'm told to get in the pen.\"

Artist Jeremy Scheuch confessed, \"I'm not proud of it, but when I was 22 I pushed a cop when I was drunk at a bar. I was told to go home and 'sleep it off.'\"

\"When I see police, I feel safe, served, and protected,\" commented writer Kyran Pittman. \"That shouldn't be a privilege, but #CrimingWhileWhite shows that it is.\"

\"Are white ppl openly acknowledging white privilege on police interactions or am I dreaming?\" asked blogger and researcher Maya Reid.

\"Some of you have pointed out that #CrimingWhileWhite helps other White folks realize policing isn't fair. My heart still hurts,\" said writer Elon James White.

\"I just hope people contributing to #CrimingWhileWhite are vocal about these disparities offline. Great, you're trending but we need action,\" tweeted Franchesca Ramsey, a curator at Upworthy.

The anecdotes are backed by evidence that suggests racial disparities in American law enforcement are very real.

Studies show that for an identical crime, black teenagers are more likely to be arrested or jailed than white teenagers. Black people are around four times as likely to get arrested for marijuana possession, despite surveys showing black people use marijuana less than white people, according to the American Civil Liberties Union.

In Ferguson, where protests have continued over the shooting death of unarmed black teen Michael Brown, official reports show black people being pulled over, searched, and arrested at disproportionately high rates compared to their share of the population. An ACLU study found a similar imbalance in Boston, where two-thirds of police stops involved black residents -- despite black people making up just one-quarter of the city's population.

Even after being convicted of a crime, being white may still hold advantages. A Princeton University study examined hundreds of American employers' hiring and found that white people with felony convictions were preferred as much as black people with clean backgrounds.