Couple delivers baby in Chick-fil-A, gets free food for life 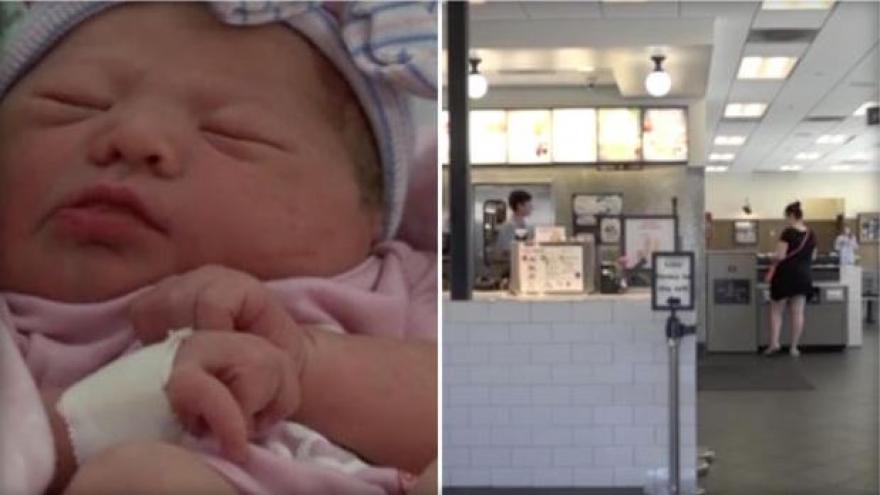 (CBS News) -- Falon and Robert Griffin were eagerly anticipating the arrival of their new baby as they drove to San Antonio's University Hospital earlier this week. But before they could get there, Falon said she needed to make a pit stop. At 38 weeks pregnant, she was desperate for a bathroom. They spotted a Chick-fil-A and pulled over. What happened next proves that the best laid plans often go awry.

"And I was very insistent," Falon added with a laugh. Even though the employees were closing up, they let her inside. The Chick-fil-A bathroom break soon turned into an emergency. The couple's baby, a little girl they named Gracelyn, wasn't going to give them time to get to the hospital.

"I realized, oh my gosh, this is happening, I'm going to give birth in a Chick-fil-A bathroom!" she told the station.

The Chick-fil-A employees said they heard the screams coming from the bathroom and jumped into action. "I was like, 'OK, this is serious. This is happening.' And I got on the phone with a 911 dispatcher," Brenda Enriquez said.

As the restaurant's drive-thru director, says she's used to delivering orders — but not deliveries like this. The 911 dispatcher asked her questions about the baby and if it was crying, and Brenda kept cool her under pressure to provide answers.

Meanwhile Robert handled the delivery and dealt with some scary obstacles. Gracelyn's umbilical cord was wrapped twice around her neck. Robert managed to unwrap the cord, and his daughter took her first breath inside the Chick-fil-A.

The couple estimates the whole thing took about six minutes.

Robert shared the amazing birth story on Facebook and it quickly gained widespread attention. "Paramedics arrived 15 minutes later so we kept her warm by having the chick fil a staff warm up white towels in the kitchen and keep bringing them to us," the new dad wrote. "For all the chaos, we all did amazing. Cut the chord while still in the bathroom, kept Gracie stable and mom calm, and it all worked out....not as planned, but everyone's healthy."

The expecting parents couldn't have expected this, but once Gracelyn was safe in their arms, they didn't seem to mind the way things worked out.

"Thinks it's pretty ironic that a proud conservative, Christian family would have a baby in a Chick-Fil-A, and wrapped in a Trump 2020 T-shirt! BOOM," Robert wrote.

The Chick-fil-A outlet also gave Gracelyn another kind of certificate, one that promises her a job when she turns 16 years old.

And not only that — the family told KENS the restaurant gifted her free Chick-fil-A food for life.

Chick-fil-A Inc.'s corporate office confirmed to CBS News that the baby was born at one of its locations, but declined to provide additional details. "Chick-fil-A restaurants are all locally owned and operated. The offer [of free food and a job] came directly from the local operator of the local restaurant and not Chick-fil-A, Inc.," the company said.