Could This Glove be the Solution to Parkinson's Tremors? 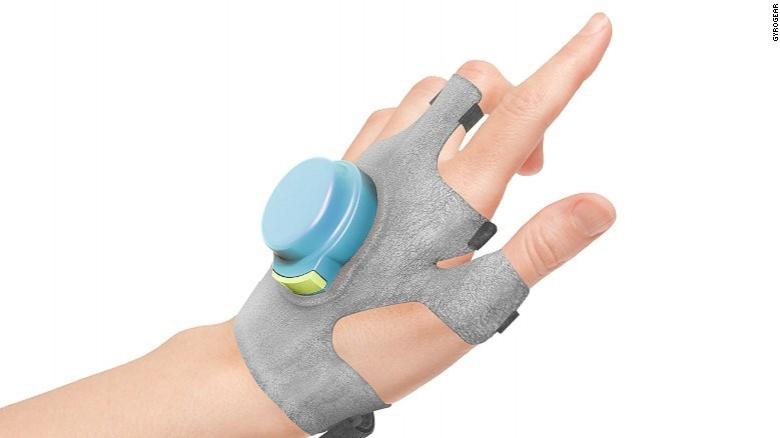 (CNN) A drug-free alternative to treat Parkinson's disease tremors could be on the horizon -- in the form of a glove.

There is currently no cure for Parkinson's disease, a degenerative neurological condition that is estimated to affect between seven and ten million people worldwide, according to the Parkinson's Disease Foundation.

The condition manifests itself mostly through tremors that often make hands shake uncontrollably, impacting the daily lives of sufferers.

What is Parkinson's disease?

While medications are a valid early treatment, they progressively become less effective and come with numerous side effects.

The proposed GyroGlove uses the laws of physics -- rather than chemistry -- to stabilize a patient's hand and control tremors mechanically.

"It feels as if your hand is moving in thick treacle," explains Faii Ong, the 26 year old founder of GyroGear, "It means you are able to make smooth, slow movements, and any fine shakes are automatically and instantaneously counteracted. You're able to do whatever you need to do -- make your coffee, cook, that sort of thing."

The glove uses a surprisingly simple concept -- a spinning top -- to help steady the wearer's hand.

Spinning tops stay upright when they spin by converting angular momentum. This means they resist any input of force, such as tremors, immediately and proportionally.

"That's exactly what we're doing with the glove, except that we are hiking it up. We're spinning the disk faster than a jet turbine, at about 20,000 rpm and we are coupling that directly to the hand," says Ong.

As a medical student, Ong witnessed first hand the debilitating effects of tremors, and was inspired to find a solution after seeing an old woman struggling to eat.

"She was trying to drink soup and then everything went down her front. So I spent the next half an hour cleaning her up, and I asked the nurses why they didn't do anything. And they said she's 103 ... there's really nothing we can do."

Not to be deterred, Ong founded GyroGear in early 2015. The team is made up of volunteer students and graduates specializing in electrical, mechanical and biological engineering.

"The entire thing has only been possible because of the team ... It's a good mixture," says Ong who, himself, is just finishing medical school."

To date, the device has mainly been funded personally, but has received support from Imperial College London and the National Clinical Director of the UK's National Health Service, Tony Young. The team also won £10,000 funding from the F Factor, an EU tech start-up competition launched by Simon Cowell.

Whilst there are already a few products on the market catering for people with tremors -- like specially made spoons, pens or mugs -- there is little available in the form of a universal solution.

The technology is admirable, but a long road lies ahead for the glove to become an everyday reality.

"In theory, this could be incredibly beneficial for people with Parkinson's, but as with all new technologies, further research will be necessary to determine its short and long term effectiveness," cautions Stuart Palma, a professional adviser from the Chartered Society of Physiotherapy(CSP).

"We have the mechanics, the electronics, and we have the harness...all the different components work, we're just trying to integrate it together," says Ong.

A large component of treatment for Parkinson's disease today comes from physiotherapy, which has had mixed success. A recent study suggested it may be ineffective, but the Clinical Director of Parkinson's U.K., David Burns, believes there's still considerable evidence physiotherapy improves the lives of people with the disease.

While primarily targeting patients with tremors, Ong also envisions the glove being used for archery, photography, and in medical practice, through its ability to stabilize hands.

"A lot of surgeons have expressed their interest," he adds. For now, the aim remains to wave goodbye to tremors.

Ong described the moment a 71-year-old woman tried the device for the first time who had suffered from Essential Tremor for about 40 years.

"Even with our weakest prototype, which is currently about four to five months old, she was able to pick up a bottle of water ... that on its own is usually a two handed affair on a good day for her. It was a beautiful moment because it represented a point where we could say, yes, all that effort has been worth it."