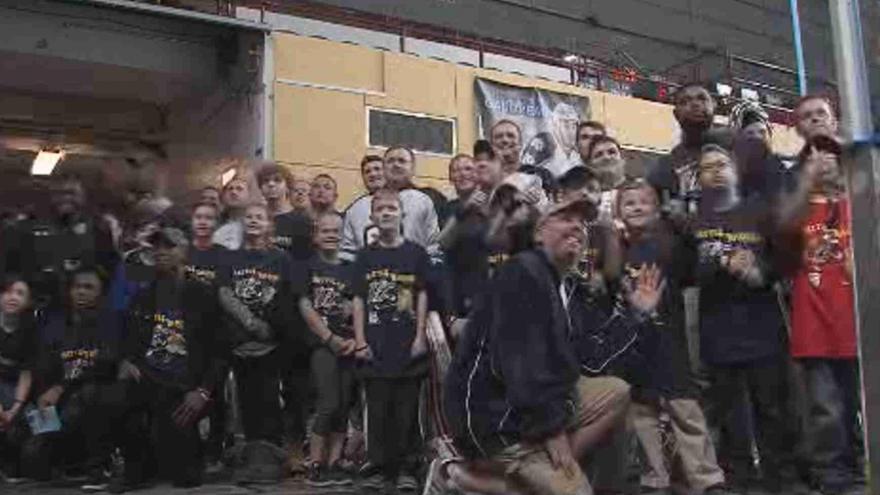 Among the families who gathered recently for the Battle of the Badges hockey game for charity was a family of a different kind but still just as tight.

A family put together by some local police who truly go above and beyond.

As local police players left the ice, fresh off their victory, dozens of kids were there to greet them.

Kids who because of various challenges in their home life, might not have gotten the chance to watch the event had it not been for the Cops and Kids Foundation who hosted a day long event with help from the Admirals hockey team.

The day included a trip to the Harley-Davidson Museum and dinner.

Alongside them every step of the way was a local police officer who served as their buddy for the day.

\"This helps because they get to see me in a different light,\" explained Officer Gregory Hunter. He's a 16 year veteran of the Milwaukee Police Department. \"So, when they encounter me again, maybe a traffic stop or whatever it is, maybe they'll remember Hunter's not so bad.\"

The non-profit was founded by retired Pewaukee Officer Bob Kraemer who says demand has never been greater.

\"The first thing cut from budgets is community policing,\" Kraemer told CBS 58 News. \"If law enforcement just sits back and reacts and never does anything to prevent, you're never going to make a difference.\"

Kraemer relies on the generosity of organizations like the Admirals, who gave the kids a VIP tour.

Almost instantly instilling a feeling that whatever the current reality might be, they can control their own destiny.

\"If I become a police officer I plan to make a difference,\" Isaiah Lewis,16, told CBS 58's Michele McCormack.

A lot of the kids who went through the program often return to volunteer.

Among them is Evan Mraz, the son of a firefighter.

His spina bifida prevented him from entering emergency services.

So now he serves through Cops and Kids.

To see even more about the program and get to know the people who are involved, watch CBS 58 Sunday morning starting at 7 a.m.