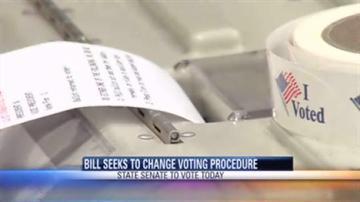 MADISON -- A proposed senate bill that would change early voting times around the state is causing tension in Milwaukee.

Senate Bill 324 would limit in-person voting by absentee ballot to 45 hours per week, Monday through Friday, eliminating the option for voters to cast absentee ballots on the weekend.

Senator Glenn Grothman introduced the bill, and Republicans who support it say it creates uniformity across the state and that smaller municipalities do not have the resources to stay open for long hours.

Mayor Tom Barrett disagrees, and says the change would jam up the city polling area and is a ploy to discourage voters, especially Democrats, from coming to the polls.