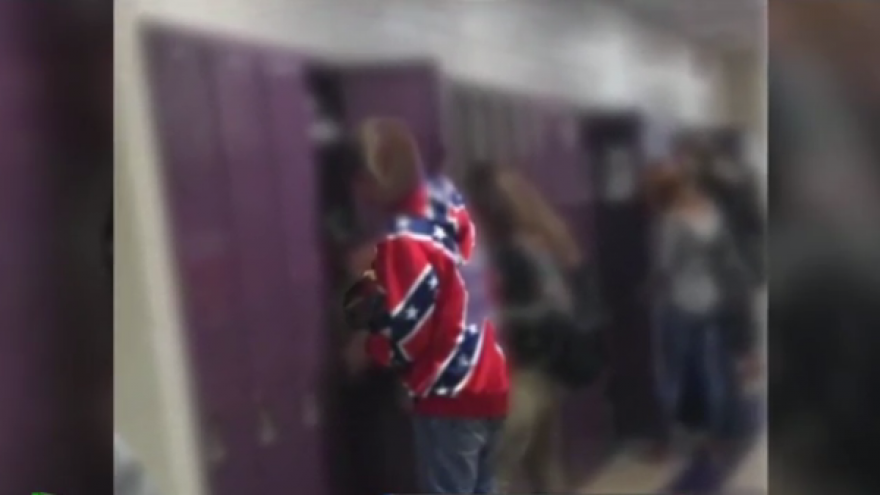 ELCHO, Wis.(WSAW)-- The Elcho School District said they will be taking a closer look at the school's dress code after they received complaints about a student wearing a Confederate flag sweatshirt to school.

Samantha Denamur said she spotted the sweat-shirt on Monday and immediately reported her concerns to the principal. Samantha said the district said they had to take a closer look at the school's dress code to see whether it should be allowed and by the end of the day the student was no longer wearing the sweatshirt.

After the picture got some attention, Denamur was approached by two students on Wednesday about why she raised the sweatshirt as an issue. That confrontation led to all three students being taken into the principal's office for a discussion Wednesday morning.

"The student that expressed concern previously, it is our understanding satisfied with the communication that took place with the administration and we believe that the matter has fully addressed by the school district," said the district's attorney, Dean Dietrich.

The principal of Elcho High School says the school district will not tolerate harassment or intimidation of any students. However, the mother of Samantha Damanur, Wendy, said she's still concerned.

"She's getting harassed quite a bit at school by people she thought were her friends. I think there is a lot of misunderstanding about what that symbol is. It's a little bit embarrassing for the school and the community that they don't have that sensitivity about it, because life happens and it's bigger than this little town," explained Wendy.

Samantha says while many of her classmates do not understand why she was offended by the sweatshirt, she believes the issue is much bigger than herself and that she was speaking up for other students who were scared to do so themselves.

"I feel they were afraid to say something because they were going to be targeted, but they messaged me saying thank you and that they support what she is doing," Samantha said.

Right now, the school district says they're taking a closer look at the school's dress code and will do a balancing test between a student's right to express themselves and what is considered distracting in the learning environment.

In the meantime, Samantha and her mother say they will continue to speak for what they feel is right and hopefully spark some change in the community.

"I think this has always been in this community and we need to start evolving and realize this isn't just a white community. Even if it was, hate toward other cultures is never okay," said Samantha.

While Samantha shared her story with NewsChannel 7 a handful of trucks with confederate flags started circling the parking lot, shouting at her and her mother.

The Langlade County Sheriff's Department said they will be looking into the actions of those young men in the parking lot but they say they will not be involved in the discussion about the district's dress code. They said since none of the actions in school were criminal, it's not their place to get involved.