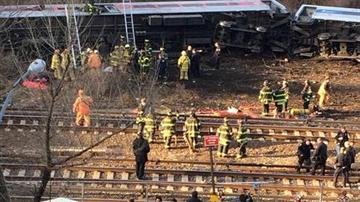 The FDNY has confirmed that at least four people were killed and 11 more are in critical condition. Additionally, six people have serious but non-life-threatening injuries, and another 46 people suffered minor injuries.

The accident occurred around 7:20 a.m. Eastern Time, near the Spuytin Duyvil station.

The Metropolitan Transportation Authority says the train derailed about 100 yards north of the station on a curved section of the track. But the MTA says none of the cars entered the Hudson or Harlem rivers, which are adjacent.

The MTA says the crash was reported by the engineer and it wasn't clear if any crew members are injured.

The fire department says 130 rescue personnel are on the scene. WCBS reporter Janelle Burrell reports some emergency responders have entered the water during the rescue operation.

There is still no word yet on the cause of the crash, which happened amid clear and calm weather.