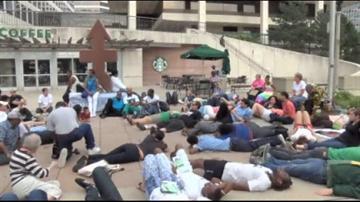 MILWAUKEE -- Red Arrow Park was the scene for another rally Friday as community members continue to press city leaders and authorities for answers in the death of Dontre Hamilton who was fatally shot during what police describe as a struggle with an officer.

According to the family Hamilton, 31, was shot 15 times by a Milwaukee police officer in Red Arrow Park on April 30.

Police say Hamilton grabbed the officer's baton and hit him with it when the officer approached Hamilton in the park.

Hamilton's family questions that explanation, and says they have yet to see photos of the officer's injuries.

The Department of Justice is investigating the fatal shooting as part of a new law that requires an outside agency to investigate officer-involved deaths.

The rally was different from past demonstrations in that dozens lay on the ground for awhile, a symbol of what the family says was several bullet wounds inflicted on Hamilton after he fell.