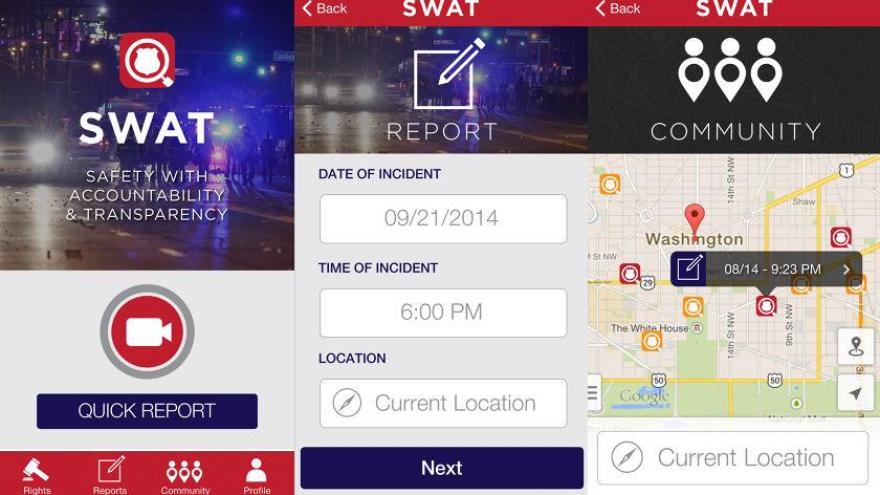 Reporting police brutality could just be a swipe away.

That's the motivation behind SWAT, a new app designed by college students Joe Gruenbaum and Brandon Anderson to counter excessive uses of force by police officers.

The app, which its creators would like to release by spring, will give witnesses of a police incident the ability to live-stream video from their smartphones to SWAT's secure servers. Once a video is on the servers, the team at SWAT can forward a copy to authorities, protecting witness recordings from possible destruction or seizure during the incident.

This might sound illegal, but it isn't. While some states have implemented restrictions on public audio recordings (most notably Illinois), no state in the U.S. prohibits recording video of the police in a public place.

"Something like a million criminal cases are compromised each year in the United States because people don't know their rights when it comes to their interactions with the police," Gruenbaum said in an interview with CNN. "And that includes the right to record the police."

The live-streaming function is step one of the SWAT process. In addition to recording secure video, a SWAT user will be able to file a police report in seconds. The app will generate a form, send the report to a nearby department with proper jurisdiction, and provide users with a summary of their local rights. "We want to make sure that people understand completely their protections, constitutionally and legally, when they're interacting with the police," Gruenbaum said.

The inspiration for the app comes from what happened in Ferguson, Missouri this year, as well as from Anderson's personal experience. A former U.S. Army satellite engineer, Anderson told CNN his partner died from injuries sustained during a confrontation with police.

"I lost my partner to police brutality, and the cops got away with it because of a lack of evidence," Anderson said.

Anderson became a civil rights activist working with organizations such as the Center for the Study of Social Policy and Georgetown University's Center for Social Justice.

He helped organize a conference commemorating the 50th anniversary of the March on Washington for Jobs and Freedom. Gruenbaum reached out to him after seeing one of his Facebook posts: their first conversation sparked a philosophical dialogue and eventually a strong friendship.

"We had very intense debates...concerning race, racial politics, and spaces of discourse for people of color," Gruenbaum reflected. "Then Ferguson happened."

"It turned into a conversation about solutions," Anderson said. "We saw a problem...so we invented SWAT."

At present, the app is still being developed, but the founders have a long-term vision in place. As app users document incidents over time, the team at SWAT plans to compile the relevant data into a format that can be made available to local governments -- a process that will require expanding their staff. Gruenbaum and Anderson already manage a startup of ten people, including product designers and marketing strategists, and they're looking to grow quickly.

"What we need are people who are interested in helping to create this app," Anderson said.