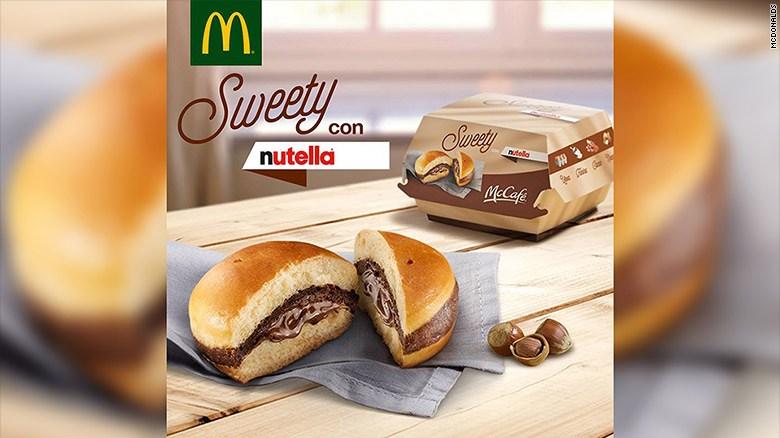 (CNN) 1. McDonald's launched its Nutella burger in Italy in November and named the product "Sweety con Nutella." It consists of a bun with Nutella spread, but no beef patty.

The treat is available in every McDonald's (MCD) location across the country.

Unfortunately for chocoholics, the company said it doesn't plan to introduce the product elsewhere.

2. It was a big year for Cheetos food collaborations.

3.  This foot-long hot dog debuted in April at PNC Park, the home of baseball's Pittsburgh Pirates.

It's topped with macaroni and cheese, salted caramel sauce, fried jalapenos and Cracker Jack, a mix of caramel-coated popcorn and peanuts. Instead of a bun, it's folded into naan bread.

"Most people think it's a rather unusual hot dog, but [it] hits a lot of flavor profiles -- sweet, salty, savory, crunchy and tangy all in one," he said.

4. Burger King's Angriest Whopper - This limited-run burger was designed to be so spicy that the creators baked hot sauce into the buns and colored them red.

A video ad even suggested burgers were grilled using fire from a volcano in Guatemala.

The burger included jalapenos and a spicy sauce for extra heat.

The burger, which launched globally in early 2016, was the sequel to the chain's earlier "Angry Whopper."

The fried chicken company, along with marketing giant Ogilvy & Mather, produced flavored nail polish for customers in Hong Kong in May.

KFC said the nail polish was "sourced from natural ingredients," perhaps in an effort to make customers feel safer about licking nail polish.