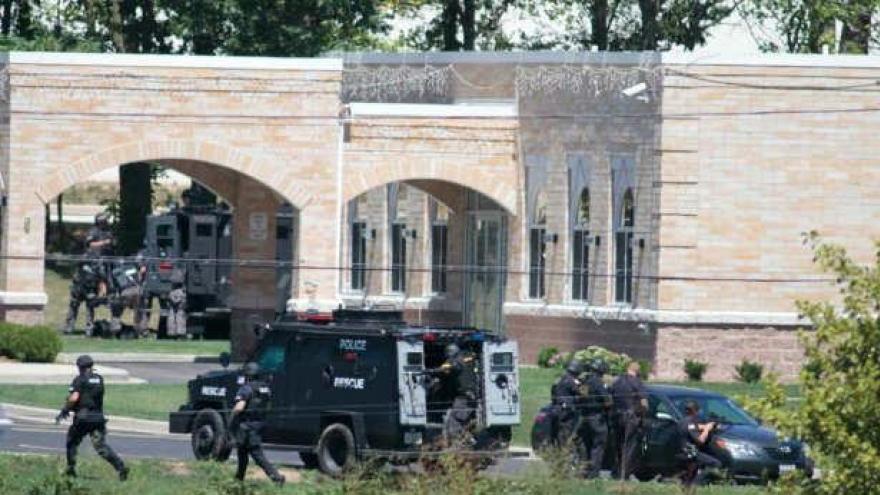 (CNN) Brian Murphy has been through the kind of thing you see in movies and say to yourself, 'that is so ridiculous. No one could ever survive that in real life.'

By all accounts, Brian Murphy should be dead.

The scars on his face, neck, head, legs, arms and hands won't let him forget the day death seemed inevitable. It was sunny Sunday morning in 2012. Dozens of people were gathering to worship in Oak Creek, Wisconsin, at the Sikh Temple.

Murphy was the supervisor on duty that day, not expecting to be out in the field. He was a Lieutenant at the time at the Oak Creek Police Department.

"My radio goes off and I realize I am the closest one to the scene," Murphy said. "I got there in about 2 minutes."

Terror at the temple

The scene unfolding at the Sikh Temple of Wisconsin can only be described as an act of terror.

The gunman was an Army veteran on a mission of hate chose that day to enter the temple and start slaughtering people, some as they worshiped.

The Sikh faithful -- highly visible for the colorful turbans some of the men wear -- had no warning that morning; they had no way to fight back. No chance.

"I was in the kitchen. We were making roti (unleavened Indian bread). We heard firing outside. I brought both kids in my hand and said let's go in the pantry," Satpal Kaleka said.

Kaleka was one of 15 women and children who huddled in that pantry together fearing death. The frantic calls to 9-1-1 were streaming in as people were being shot first outside then inside as they worshiped.

"The only woman who was killed actually went into the temple to pray saying 'God will protect me," Murphy learned later. 41-year-old Paramjit Kaur died as she prayed. Five others including Kaleka's husband, the President of the Temple, also were shot to death.

As shots continued to ring out, Murphy arrived in his squad car.

"I get there and I get out. I see two people. It turned out to be two brothers lying across each other. They weren't moving, " he said.

But someone else was. 40-year-old Wade Michael Page had made a plan and was executing it. He was an Army veteran who had become a white supremacist.

Page and Murphy saw each other.

"I missed," Murphy said, clearly annoyed with himself.

Page did not miss.

"It hit my jaw bone went down my throat, ripped apart my voice box and my Esophagus and uh bounced off my spine," He said, adding, "Didn't feel that bad just felt like getting a punch."

He took cover behind a car but then he lost sight of the gunman.

"Tactical mistake on my part," he said.

Page suddenly shot him from behind. Murphy's thumb exploded. His gun was blown out of his hand. And the shots just kept on coming.

"About half way through ... I'm thinking, 'When are you going to be done shooting me?'" Murphy said.

Suddenly Murphy was lying on his back looking eye to eye with the shooter who was standing over him.

The worst was the shot that pierced Murphy's skull.

"It was like the loudest explosion in my head," he said. "That's when I thought, well this isn't good."

As he was being shot another officer, Sam Lenda, arrived.

"He thought he saw someone waving at him but quickly realized it was the shooter," Murphy said. "He was pointing a gun at him."

What Lenda didn't know was, in between leveling the gun at him, Page was shooting at Murphy.

But Page shot and killed himself.

Murphy lay there, riddled with bullets, 15 to be exact. But he was still breathing.

Of the 15 shots, three hit Murphy's bullet proof vest. Twelve entered his body. Two bullets are still inside him to this day.

A year later, Murphy was approached by a survivor who was inside the temple during the shooting.

It turned out there were exactly 15 people hiding in the pantry. Murphy had caught the shooter's eye before he could go back in and continue killing.

"That has to be divine intervention," he said.

"He is our hero. Not just because he took bullets intended for us but because of the work he has done to bring awareness about the Sikh community since then," Pardeep Kaleka said.

Kaleka sits next to his mother. He is the son of the Temple President who was murdered that day.

"I know this sounds strange but in some ways it changed our lives but for the better," Kaleka said. "I wouldn't have said that initially but the loss made us appreciate each other and bond more tightly and never again take our relationships or life for granted."

He also gained a friend. Brian Murphy. The two have formed a brotherhood.

"We can talk and be real with one another. Honest. We learn from each other," Murphy said.

While they love America, They say they are worried about the American they see emerging.

"We are scared. As Sikh people we are often targets," Kaleka said. The attack on the Temple was nearly five years ago, the attacks on Indians in America this monthhas heightened that fear once again.

'Go back to your country'

In Kent, Washington, police are still searching for a gunman who they say confronted and shot a Sikh man, originally from India's Punjab province last Friday.

Police say the suspect confronted the victim in his driveway telling him to "go back to your country" and shot him in the arm after a heated argument.

The victim, who is a US citizen, follows the Sikh faith and wears a turban and has a beard.

The victim sustained non life-threatening injuries. The Kent police department is investigating the incident as a possible hate crime, according to Chief Ken Thomas.

Last month, in a suburb of Kansas City, a gunman walked into Austin's Bar and Grill and targeted two men originally from India.

Both worked at Garmin, a GPS device company.

Patrons who witnessed the shooting told local media they heard the suspect yell, "get out of my country."

Sikh-American group members say they have faced discrimination and abuse,often in ways that are xenophobic or even Islamophobic, though Sikhs are not Muslims.

The first victim of a so-called "revenge killing" after the September 11th terror attacks was a Sikh man who had nothing to do with the attack. Balbir Singh Sodhi was working at his gas station when he was gunned down by a man who said he wanted to kill "towel heads." The despicable act left the Sikh community reeling.

"I have learned that 99% of the men in the US that you see wearing a turban are Sikh, and not Muslim, but whether you are Sikh or Muslim, being persecuted for what you are wearing is ridiculous," Murphy said.

The Southern Poverty Law Center, which tracks hate crime, has found an uptick of incidents targeting Muslims and other religious minority groups since the election of President Donald Trump.

Murphy got a chance to speak directly to Trump during a CNN town hall held before his November election. Murphy asked Trump what he would do as president to protect all Americans.

"As President he's come out and he's assured us that it's not going to be tolerated. I appreciate that, but I think anyone who is caught in one of these hate crimes needs absolutely to be prosecuted to the fullest," Murphy said.

Murphy is now working for the company that makes the bulletproof vest that saved his life. His job involves talking to other officers who have been shot. When he is in front of a large group of law enforcement officers he does not fail to mention the Sikh religion.

"I use a variety of slides. One shows the Sikh beliefs.And I ask people how different is what they believe compared to what you believe?" Murphy said. "What we need to do right now is come together as a country."

President Obama awarded Brian Murphy and Sam Lenda the Medal of Valor in 2015.