Clinton and Trump Square Off in Third Presidential Debate 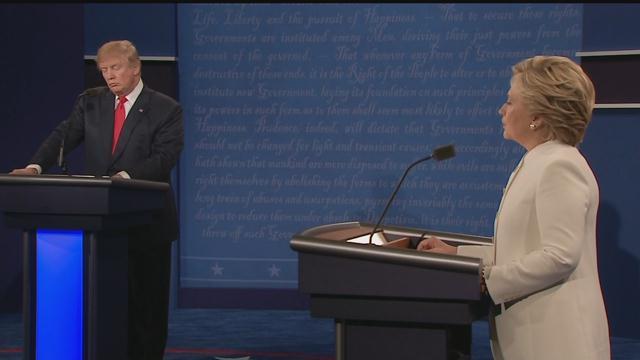 LAS VEGAS (AP) -- Donald Trump is again refusing to promise that he'd accept defeat on Nov. 8 if Americans choose Hillary Clinton as the 45th president.
The Republican nominee says he'll "look at it at the time." He was responding to moderator Chris Wallace's specific questions about whether he would honor the American tradition of the presidential loser conceding to the president-elect.
When Wallace pressed him again, Trump responded again that he'd "keep you in suspense."
Trump has argued that the national media is trying to rig the election. He is again stating without any evidence that "millions" of registered voters "shouldn't be registered."
And he suggests Clinton would be an illegitimate president because of her use of a private email server when secretary of state. He says she "never should have been allowed to run."
Clinton calls the response about the recession "horrifying."

Republican Party of Wisconsin Executive Director, Mike Duffey, said, “Donald Trump was the clear winner tonight, because he demonstrated a willingness and determination to put the American people first by fighting to make our country great again. Donald Trump showed that he will shake up the failed system in Washington, D.C. that works for insiders like Hillary Clinton and Russ Feingold, not the everyday people of Wisconsin. Once again, Hillary Clinton refused to take responsibility for lying, for endangering our national security, and for promoting a rigged system that protects the powerful few like herself.”

Democratic Party of Wisconsin Chair, Martha Laning, said, "Donald Trump simply doesn’t have the temperament to be President of the United States. Throughout his campaign he has insulted and demeaned millions of Americans, cheered on Vladimir Putin as he and Russian hackers tamper with our elections, questioned why we don't use nuclear weapons, and has said he will appoint Supreme Court justices who would roll back decades of progress. We must do everything we can to ensure we elect Hillary Clinton as our next President of the United States."