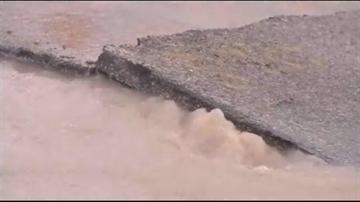 MILWAUKEE -- The last five days have been costly for the city.  It costs about $10,000 to fix each busted water main.

76 have broken since Saturday.  Most have been repaired so far.  The good news is they found the source of the leak.

It's at an intersection but interestingly enough it's on a pipe that had some problems about a decade ago. Just in a different spot.

They're bringing in a welder today to fix it.

The city has found that more than half the main breaks come on pipes installed between the mid 1940s and mid 1960s.

They say the pipes built during that time were thinner and longer but made too fast. Hence the issues.

The older piping from the late 1800s is still holding up well.

City leaders are forced to make some quick and difficult decisions about repairs.

\"That's a decision that you make as you go along,\" Milwaukee Water Works Superintendent Carrie Lewis said.  \"If there's a pipe that has just one or two breaks very sparsely in time, then you would just repair those. If you have a water main that is breaking repeatedly and causing inconvenience and property damage you put those at the top of your list and do those first.\"

People might have some discoloration in water if there's been recent repairs. It's best to just run cold water for a little while to flush that out.