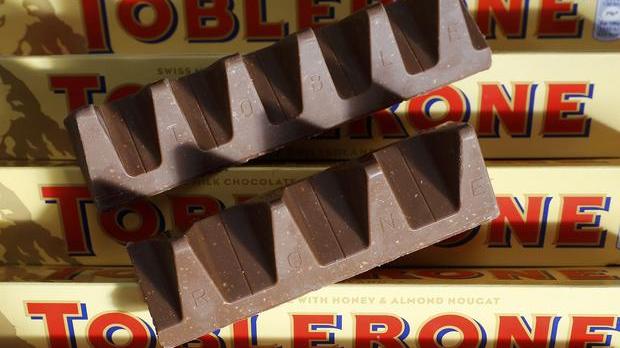 (CBSNews) -- Chocoholics are uniting over what they’re calling “Tobleronegate,” and what some think is a plot to ruin an iconic sweet: a redesign of the Toblerone bar that’s shaved 12 percent of its chocolate content while keeping the price unchanged.

The chocolate bar’s manufacturer, Mondelez International, is facing unhappy customers after widening the gaps between the signature triangular chocolate peaks in two of its U.K. bars, shaving one from 170 grams to 150 grams and the other from 400 grams to 360 grams.

“Make #Toblerone great again!” one fan wrote on Twitter, while another complained, “Just when I think this year can’t get any worse, #Toblerone proves me wrong.” Another wrote plaintively, “I’ve been through a lot after my accident, drowned, heart stopped 7 times, but this smaller Toblerone is too much to handle.”

I've been through a lot after my accident, drowned, heart stopped 7 times, but this smaller Toblerone is too much to handle. pic.twitter.com/G02nTnvh8B

On its Facebook page, Toblerone said the rising cost of ingredients forced it to make the change. Slimming down a product is not an uncommon tactic for food manufacturers, with “shrinkflation” a bane of grocery shoppers across the world. Companies rarely, if ever, announce the changes, leaving it to sharp-eyed consumers to notice the subtle differences in weight.

“Whole divisions of major companies” work on shrinking products while keeping their prices unchanged, economist Pippa Malmgren told The Associated Press. “This is an art form,” she said. “This is not random.”

Malmgren, author of “Signals: The Breakdown of the Social Contract and the Rise of Geopolitics,” wrote in her book that shrinking the size of goods can signal a forthcoming jump in prices.

Some Toblerone lovers pointed to the United Kingdom’s withdrawal from the European Union in June, or “Briexit,” as a potential cause for the price hike, with varying levels of seriousness.

“Look at what #Brexit has done to our chocolate bars,” one consumer wrote on Twitter, including before and after photos of the Toblerone bars.

While it’s unclear whether Brexit had any impact on Mondelez’s decision to shrink the Toblerone bars, some food manufacturers have said they’d raise prices in the U.K. amid a falling British pound and uncertainty about the country’s economic future.

One irked consumer asked Toblerone to consider a branding change to go along with the redesign. “I see the new bar doesn’t have the letters TOBLERONE on the triangles, because there aren’t enough of them anymore,” he wrote on Toblerone’s Facebook page. “Perhaps you could put BREXIT on them instead just so we all know who to thank for this.”