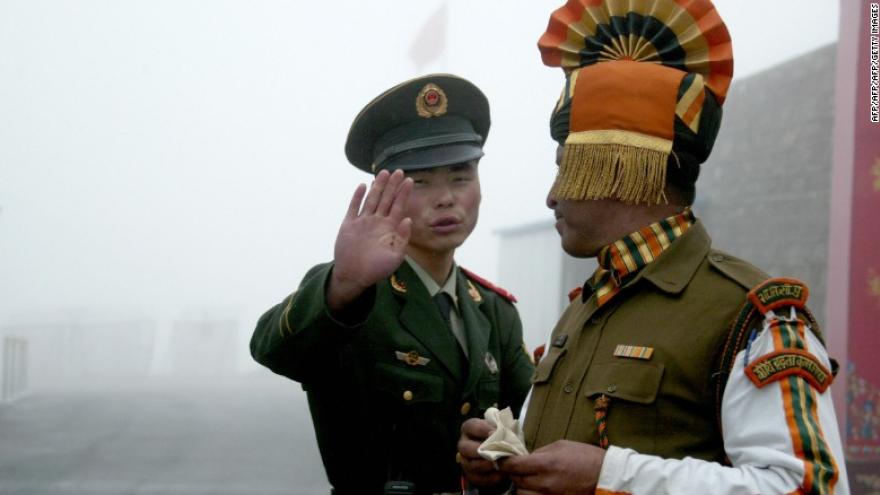 (CNN) The Chinese government has issued a warning to neighboring India to withdraw its troops from the disputed Doklam border area to "avoid further escalation of the situation."

The comments, made by Foreign Ministry Spokesperson Lu Kang during a regular press briefing Tuesday, come amid what has evolved into an increasingly bitter and entrenched border dispute between the two nations.

The stand-off, now entering into its fifth week, centers on a thin strip of land in the tri-junction with Bhutan. Though not a part of Indian territory, the area is close to the 'chicken's neck' a strategic corridor that serves as a vital artery between Delhi and its far northeastern states.

The dispute appears to have escalated in recent days, say analysts, with both Beijing and Delhi looking to consolidate their positions. On Monday, China conducted live-fire drills in the Qinghai-Tibet Plateau close to the site of the current stand-off. The aim of the drills, according to reports in Chinese state media, was to improve troops' "combat capability in such locations."

An increasingly bellicose domestic media environment has further added to the sense of intractability surrounding the dispute, with press reports from both sides calling on leaders to protect the "sovereignty" and "honor" of their respective nations.

A widely circulated op-ed published by the Chinese tabloid the Global Times Tuesday, urged India to back down or "face the consequence of an all-out confrontation."

The commentary repeated unconfirmed reports in the Indian press that Indian troops are now stationed at the border area and have set up logistical support. "In response, China must continue strengthening border construction and speed up troop deployment and construction in the Doklam area," said the op-ed.

The Doklam dispute is the latest in a long-running series of territorial flare-ups between India and China. In 1962, the two countries engaged in a bloody border war and skirmishes have continued to break out sporadically in the decades since.

"I'm not sure how this situation de-escalates, not just because of the media hype on both sides, but also because China may not have an interest in de-escalating," said Yvonne Chiu, Assistant Professor at the Department of Politics at the University of Hong Kong.

"Unlike flashpoints in the South and East China Seas, a small conflict with India can be better contained because it is less likely to draw the involvement of other major powers in the region (such as the US)," added Chiu.

The conflict, if contained, could potentially serve several useful purposes for China, said Chiu, including "better establishing one of its regional territorial claims, giving its domestic audience something to cheer for, and giving its military some practice."

The dispute began on June 16, when China accused Indian border guards in the northeastern state of Sikkim of crossing into its territory in southwestern Tibet, in an attempt to obstruct the construction of a new mountain road. India has not denied its troops were present in the area. According to a statement released by the Indian Ministry of Foreign Affairs, Indian personnel "approached the Chinese construction party and urged them to desist from changing the status quo."

This was followed by a formal compliant, or demarche, issued by the Bhutanese government that accused China of constructing a road "inside Bhutanese territory" in "direct violation" of its territorial treaty obligations.

India and Bhutan have maintained historically strong relations. Bhutan co-operates closely with India in determining its foreign policy, and the Indian Army is involved in the training of its armed forces.

China, which does not have formal diplomatic ties with Bhutan, has repeatedly denied that it has violated any treaties and has called India's involvement in the issue "utterly unjustifiable."

On Friday, the Indian government convened an all party meeting to brief national political parties on the Doklam situation, in which senior ministers expressed support for a diplomatic solution.

"Evidently, while the Indian side is trying to create wiggle room for de-escalation, the nature of the Chinese response is not proving particularly helpful. De-escalation without one or another side losing face thus becomes harder," said Brookings India Fellow Dhruva Jaishankar.

"All military forces must be prepared for a range of contingencies and we are seeing that, but there is also a good deal of alarmism. There has not been a death on the India-China border for forty years, and both sides have learned from experience as to how to manage their differences," added Jaishankar.

The move towards a political solution could yet gain momentum in the run up to the 19th Communist Party National Congress, China's twice a decade handover of power scheduled for later this year.

"Xi Jinping is trying to maintain stability and reduce any foreign policy risks, which could jeopardize his position at the all-party congress," said Selina Ho, Senior Research Fellow at the Center on Asia and Globalization at the National University of Singapore.

"Xi Jinping is expected to put a lot of his own people in power (at the all party congress). There is also a possibility of him extending beyond two terms. Domestic stability in addition to foreign policy stability is important for him right now."

The dispute, however, comes at a time of steadily deteriorating ties between the two countries, with Chinese investment in Pakistan-administered Kashmir, an increasing Chinese naval presence in the Indian Ocean, and Chinese frustration with India's unwillingness to join its One Belt One Road development initiative as major points of contention.

"The situation does indicate that China is willing to test the limits of what it can get away with in all regions, not just the South and East China Seas--which shows both confidence and its desire to probe for possible geopolitical weak points," said Yvonne Chiu. "So while the situation does not yet seem very severe, it could become so in the near future."