Cheech and Chong Make A Stop in Milwaukee 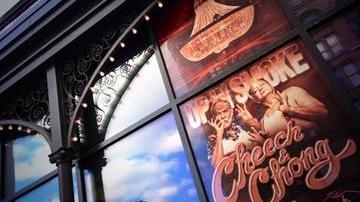 MILWAUKEE-- Call them the poster boys for marijuana legalization, the comedy duo \"Cheech and Chong.\"

Chong and his partner in comedy, Cheech Marin performed at Milwaukee's Pabst Theatre Thursday night.  Their performance is part of the \"Up In Smoke\" Tour, this tour comes thirty years after their cult classic movie with the same name.

CBS 58 sat down with Chong before the show to get his thoughts on Wisconsin's marijuana legislation and the legalization of marijuana in two states.

\"Any move forward is a great move,\" said Chong.

Chong says he was in Colorado the day recreational marijuana became legal.

\"It feels really good, I feel totally vindicated now,\" he said, \"especially after going to jail for a bong.\"

Although many states are considering pro-marijuana legislation, including Wisconsin.  Rep. Melissa Sargent (D-Madison) authored AB 810, which would legalize marijuana.

“After researching this issue extensively, I believe that this bill (AB 810) will benefit Wisconsin and its citizens in many ways, including: addressing racial disparities in arrests, providing medical benefits, time and cost savings to law enforcement, and additional revenue for the state. The facts clearly show that legalization is right for Wisconsin and that the most dangerous thing about marijuana is that it’s illegal.”

Wisconsinites are still split on legalization.

Many support medicinal use, but do not support recreational use.

Opponents to legalization, including Gov. Scott Walker, emphasize marijuana is a dangerous drug.

Despite opposition, AB 726 is making gains at the State Capitol.  The bill would legalize Cannabidoil (CBD), a marijuana extract without THC.  Chong says it's progress for Wisconsin, but recreational smokers are still out of luck.

Chong says recreational marijuana isn't for everyone, but should be their choice, not the government's.

\"They try to legislate morality, you can't do that.,\" said Chong.

Chong says he believes there are many medical benefits to CBD, but hopes to see more states legalize recreational marijuana.