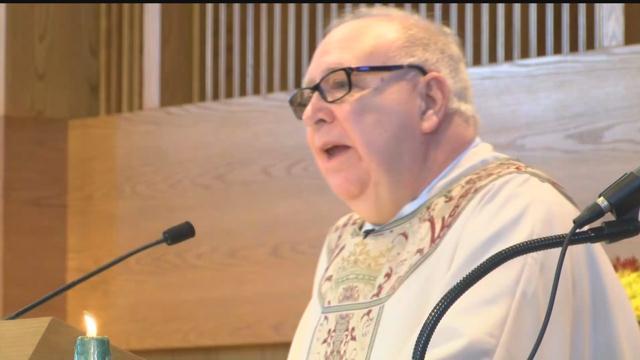 A Cedarburg priest returns to work this weekend, holding Sunday mass for the first time since investigators cleared his name.

65-year-old Father Tom Eichenberger was accused of molestation and put on leave by the Diocese of Milwaukee in September. Outside investigators found the nearly 40-year-old accusation to be baseless.

Members of St. Francis Borgia Catholic Church - where Eichenberger has been priest for the past 14 years - showed their continuing support during the Sunday service.

"I'm the proud papa of the parish. And I'm so proud of all of you for sticking by me," Eichenberger - who goes by Father Tom - said.

"I'm so grateful also, you know, when you're accused all it takes is one person - one person to accuse you - and down the drain goes a whole lifetime," Father Tom said.

"Everybody is extremely happy that he's back," church member Scott Hill said.

"You know, when the news broke nobody believed it. You have to be cautious because I have kids at the [St. Francis} school - we all have kids here. But not for a minute did I believe but I know most of the parishioners did not believe it," Hill said.

Hill knows the timeline of what happened as well as anyone. The accusation went back to 1977 alleging Eichenberger molested a seventh grader at Holy Assumption Parish in West Allis.

The diocese quickly placed him on leave and offered to turn over every piece of information they had to the Milwaukee County District Attorney's office (the alleged crime would have been outside of the law's statute of limitations).

The matter was then taken over by a private investigator who presented a full report for the Archbishop's review.

"It proved what all of us thought, that it was just an unfounded accusation. And Father Tom is a great priest. We all love him," Hill said.

"I'm so glad that I'm innocent and I'm able to stand before you again and finish out my term at St. Francis Borgia. Thanks for your love and prayers," he said to applause.