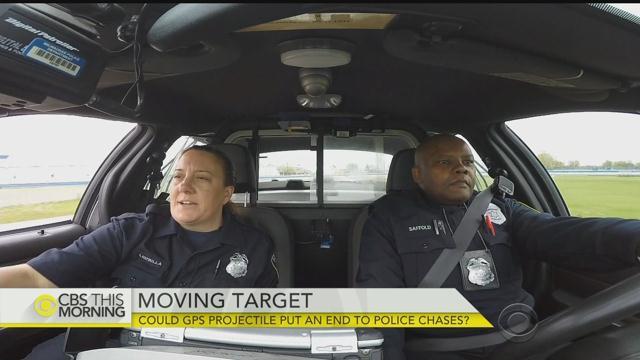 MILWAUKEE (CBS NEWS) -- It appears that nearly every day on average, someone is killed in a high-speed police chase, and police departments across the country are looking for safer ways to nab suspects on the run.

This is how it works: Compressed air units are installed in the grill of police cruisers, containing two four-and-a-half inch projectiles packed with GPS satellite trackers and coated with enough adhesive to make them stick to a fleeing vehicle.

When a suspect runs from a traffic stop, an officer can fire the projectiles at the suspect's car and basically relax -- no need for sirens or lights or 90 mph chases that could kill people. Computers read the GPS signal and track the vehicle in question.

A trial of the StarChase system has been underway in Milwaukee since December.

"I've actually had a lot of success with it," Officer Kim Lastrilla said.

Lastrilla controls the projectiles from a button on her dashboard or a fob in her hand.

Right now, the projectiles stick about 50 percent of the time, though with training, Milwaukee authorities expect that number to reach about 75 percent. They do have some trouble in wet conditions.

But there's no question that the technology reduces stress for police -- and suspects.

"The longer they go un-pursued, the more their driving behavior settles down because they don't want to get killed either," Milwaukee Police Department chief Edward Flynn said.

But they do get arrested. Of 28 successful uses of StarChase in its trial period, 17 people were taken into custody and 26 stolen cars recovered.

Each unit costs about $5,000. That's a lot of money, but when you consider that the No. 1 cause of death for police officers in this country involves car crashes, it could be money well spent.