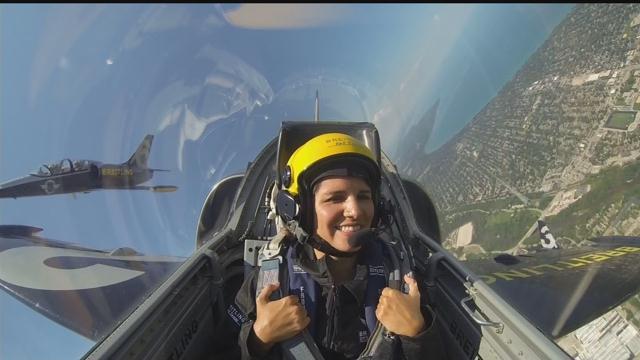 The Breitling Jet Team is performing at Milwaukee's Air and Water show for the first time, as part of their American Tour.

The team is made up of 8 French pilots, making it the World's largest civilian jet team.

\"It's very cool to come to the U.S because America is a country of Aviation,\" said Jacques Bothelin, the leader and founder of the Breitling Jet Team.

55-year-old Bernard Charbonnel has been with the Breitling Jet Team since it was created 13 years ago, but he's been flying planes since he was 15-years-old.

\"For the team and the pilots it's great to be in Milwaukee because this is our full time job, to perform and air shows,\" Charbonnel said.

Charbonnel took CBS 58's Sandra Torres on a wild ride with the other 7 pilots, during an exclusive media flight in advance of the Air and Water Show. (See video above)

The pilots fly in L-39 C Albatros jets that can reach speeds of up to 565 mph. These Air Force trainers were made in the Czech Republic and produced during the period of the Cold War.

The Breitling Jet Team will be showing off their skills during a performance on Saturday at 2 p.m.