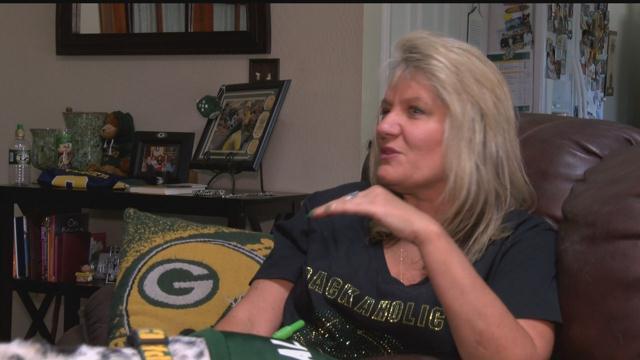 "I have a shrine in my classroom," said Calhoon. She is a rabid Packers fan and friend of Chico's royal family - the Rodgers family.

"They're super kind people, but they're also hilarious," said Calhoon. She has more than just great memories of the Chico Native Rodgers. She has insight into the family background that produced a star, "they lived in a modest home, but they supported Aaron through quarterback camp. They did without so their boys could succeed."

Lee-Anne confirms what Wisconsin football faithful have believed for years about who Aaron Rodgers truly is, "he's not a center of attention guy. He's a humble guy. What you see on TV is Aaron. There are no airs. You can't miss his humor, he's hilarious."

And as you might expect, Rodgers proved to be a special person, traits that emerged in Chico long before the fame and fortune of Green Bay. Calhoon tells CBS 58 that one time when a Spanish teacher got sick, Rodgers stepped up, grabbed the book and started teaching the class.

One look inside Calhoon's fan cave proves it - she's been there every step of the way as Rodgers has become a national icon. Even her dog is dressed in green and gold and proximity has its privileges when Rodgers makes headlines.

And as her fandom has followed Rodgers, this northern California native has grown to know and appreciate a Wisconsin tradition. It started with a trip to Lambeau Field the year Rodgers led the Packers to a title, "it was awesome. Tailgating. Snow."

Lee-Anne Calhoon is also a proud Packers owner, "It was like $250 for one, and all you need is one!"

Rodgers success is more than a fun conversation piece, it's an inspiration for Calhoon, who's been diagnosed twice with Bell's Palsy and once suffered 18 migraine headaches a month.

"I decided with the negative stuff in my life. I'm going to put energy into the classroom and now my home and office." said Calhoon.

With a life painted green and gold, and an association with Ed and Darla Rodgers, Aaron and his two brothers, you can understand why Lee Anne has a favorite among the Packers all time greats, "anything he could do to break Favre's records, he would make people happy. Sorry to those in Wisconsin!"

And just as Rodgers has stayed true to his roots, Lee-Anne Calhoon says she'll always star true to Number 12.

Lee-Anne says she’s impressed with Wisconsinites’ hospitality. She sent mandarins from her home in Chico for Rodgers’ birthday in December. Rodgers had moved, but the postmaster in his new town put the mandarins in his fridge until Aaron came by to pick them up.