Candidates weigh in on border crisis 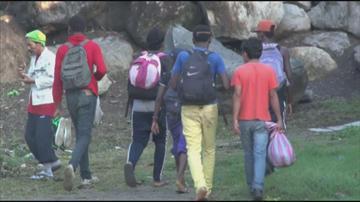 MADISON -- Thousands of undocumented children have left their families, and home to cross the Mexican border into the U.S.

The candidates running for a chance to represent Wisconsin’s 6th Congressional District weighed in on this issue Friday.

Three Republicans and the lone Democrat found common ground on one thing; in a humane way, the undocumented children should be sent back to their countries.

The children are coming by themselves, and for the most part have nowhere to go.

The U.S. Department of Health and Human Services says 50 undocumented children have already been placed with sponsors in Wisconsin.

He says Wisconsin should have nothing to do with giving these children a place to stay.

“Young people should be returned to their families where they belong, back in their home countries. And we really need to send a message if you want to live in this country, you need to go through the legal immigration process.\" Stroebel said.

Through a statement from his campaign, Leibham said in part, “Last time, I checked the Mexico border was over a thousand miles from Wisconsin and the children are being brought here -- instead of being reunited with their families?

The Democrat running for the 6th Congressional seat, Winnebago County Executive Mark Harris, said there may be some cases where Wisconsin is a short term place to stay.

\"If they have family members here and they can be housed with relatives that are already here, that probably makes sense.\" Harris said.

If Congress approves the President's nearly 4-billion dollar request, more than 100 other children could end up in Milwaukee.