"Can I Shoot it Down?" Audio shows man's 911 Call before Blimp Crash at Erin Hills 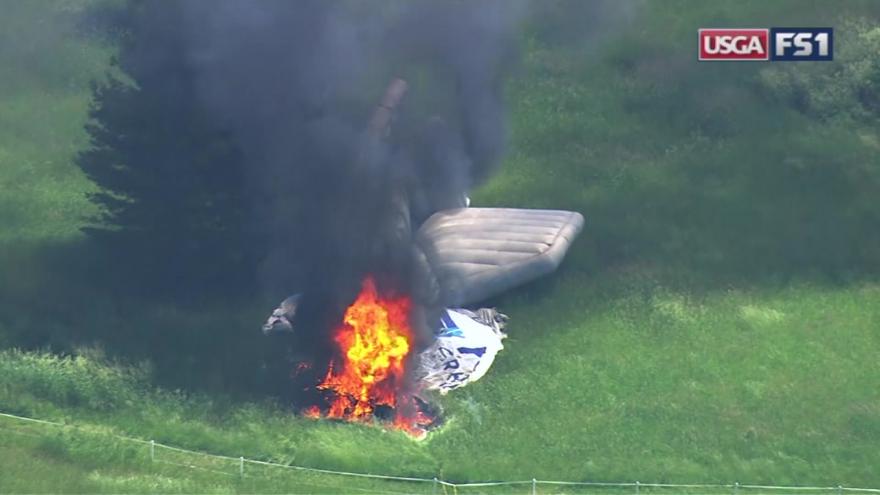 About two and a half hours before a fiery crash outside Erin Hills, a man called 9-1-1 threatening to shoot it down.

Those audio recordings were released Tuesday, along with an incident report from Washington County.

"They just landed a great big blimp right off of the property next to me, and it's scaring the living s*** out of my cattle," the man says. "It's intentional. they were inflating it and now it's over here hovering, and I have cattle and it's scaring the hell out of them."

Later, he asks the dispatcher "Can I shoot that son-of-a-b**** down?" The dispatcher pauses, before saying "No... We'll send a squad right over okay?"

An incident report reveals investigators quickly contacted that man after the blimp crashed later that morning. He has since been ruled out as a suspect, and tells CBS-58 he was at Erin Hills when the crash actually occurred.

The company that owns the blimp, AirSign, released the following statement Tuesday.

"We appreciate the NTSB's preliminary report sharing the pilot's recall of the incident, and alluding that the collapse was not pilot error. The 911 call that included a threat to shoot down the airship, however, does concern us -- and discussions with others who inspect these aircraft where they are manufactured in the UK has given us reason to return to that possibility. These experts have indicated that the type of panel collapse as reported is 'unheard of.'

"We will continue our own independent investigation into this concern, and provide law enforcement and the NTSB with information we uncover as it continues its more thorough investigation in the months ahead.

"We continue to remain in close contact with Trevor Thompson and his family, and are encouraged by the care he is receiving. We pray for his full and swift recovery." -- Patrick Walsh, CEO, AirSign.

According to the incident report, Thompson had more than 30 years flying blimps, and had never been in a crash before.

He called the decent to the ground "10 seconds of absolute terror."