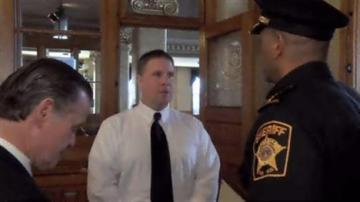 MILWAUKEE-When Milwaukee Alderman Bob Donovan hands out his Golden Gloves Awards to citizens for doing the right thing, it usually is a cause for celebration.

On Wednesday, it was also an attempt to get the honoree his job back after being fired for helping a crime victim.

\"It was a punch in the stomach,\" William Bierman told CBS 58 News. \"I've always worked hard and I worked for them for nine years.\"

Bierman became emotional at times during the City Hall ceremony where he received the support of many officials including Milwaukee County Sheriff David Clarke.

MCTS would not comment on the awards, only saying that when Bierman interrupted an attack on a woman he jeopardized his own safety and opened up his employer to liability.