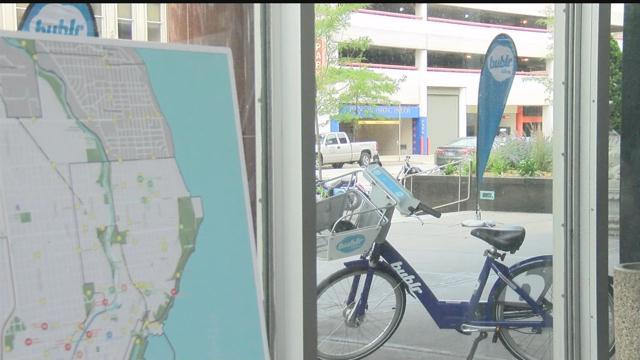 It's been 11 months since Milwaukee first started seeing those blue rental bike stands go up around town.   Now they're talking about expanding the so-called Bublr bikes into places that haven't seen them yet.

The plan is to install 30 new bike stations, radiating from the core group already in downtown Milwaukee and that includes both affluent and low income neighborhoods. It's something Bublr couldn't be happier about.

\"Our mission is to create a bike share system that all people can use,\" said Kevin Hardman, executive director of Bublr Bikes.

Instead of following the traditional routes of other bike share systems and installing more stations in affluent neighborhoods Bublr is going in the other direction.

They're proposing 30 new locations across Milwaukee.

When asked if he's worried the thousand dollar bikes will be stolen, Hardman says-not at all.

\"We haven't had any issues yet and there's been a lot of eyes on the streets and the nice thing is with these bikes its a little difficult to say \"Uh yeah my friend gave me this bike,\" said Hardman.

A city engineer agrees saying if a bike is stolen, there's a way to find it.

\"By utilizing a credit card with the system you're giving them a certain amount of information as a user and providing a certain level of certainty that the bike will be returned,\" he said.

Bublr says they're so confident they're working to break that barrier down too.

\"We're strongly looking at ways that we can simply provide a cash option,\" said Hardman.

Hoping in the long run i provides more rides for all.

\"We've got it operated very well, we serve our customers really well so we are very confident Bublr will be an option for all sorts of Milwaukeeans,\" said Hardman.