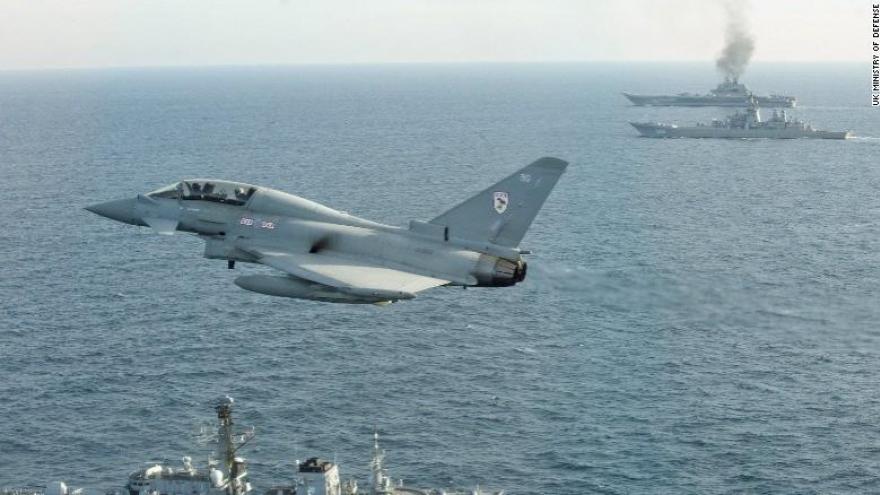 (CNN)Britain's defense secretary had some harsh words for the Russian military on Wednesday as UK warships and warplanes tracked Russia's only aircraft carrier through the English Channel.

"We are keeping a close eye on the Admiral Kuznetsov as it skulks back to Russia; a ship of shame whose mission has only extended the suffering of the Syrian people," Defense Secretary Sir Michael Fallon said.

The carrier and its escort are on their way back to Russia after participating in airstrikes in Syria. They left the Mediterranean Sea earlier this month.

Russia's air strikes in support of the forces of Syrian President Bashar al-Assad have been crucial in helping them to gain the upper hand in the long-running conflict.

In December, they succeeded in pushing rebel fighters from the key city of Aleppo.Syria's brutal civil war has raged on for nearly six years and killed an estimated 400,000 people.

Fallon said British forces were keeping a close eye on the Russian ships as they plied the English Channel.

"We are man-marking these vessels every step of the way around the UK as part of our steadfast commitment to keep Britain safe," Fallon said.

The defense minister's comments were accompanied by photos of British jets and ships shadowing the Kuznetsov and its escort, the guided missile cruiser Petr Velikiy.

British forces also shadowed the Russian carrier in October on its way to Syria.At the time, Russia said the Kuzentsov's voyage was "to ensure naval presence in the important areas of the world ocean. Special focus will be made on safeguarding security of maritime traffic and other types of Russian maritime economic activity and also responding to new kinds of modern threats such as piracy and international terrorism."

But others took a different view.

"It's a show of force and a show of capabilities," Peter Felstead, editor of Jane's Defence Weekly, told CNN in October. "In terms of strike missions, they (the Russians) could just as easily have conducted them with the land-based aircraft they already have in Syria."