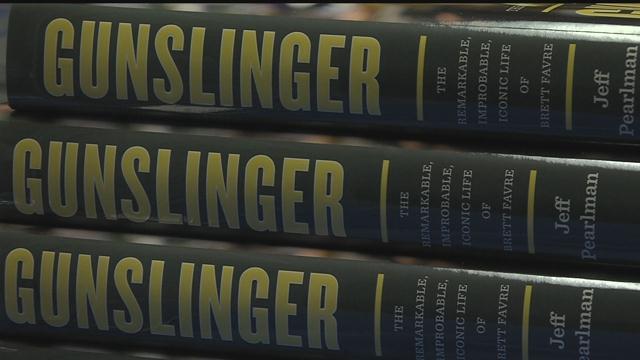 Brett Favre has won championships, awards and is in the NFL Hall of Fame.

Now his story is burning up the best seller lists.

The author of a new book called “Gunslinger: The remarkable, improbable, iconic life of Brett Favre” was signing copies of the book at the Elm Grove Library on Tuesday.

Jeff Pearlman spent two and a half years working on the biography of the packers quarterback, and interviewed more than 500 people.

Pearlman is a journalist, but also an admirer of Favre's unique style as a quarterback.

"You watch Favre, he rolls left, he turns right, he throws into double coverage or he makes some throw from the side of his hip that you wouldn't expect and he made some of the dumbest plays ever and he made some of the greatest plays ever and all of that was part of the show.  Greatest quarterback ever?  No probably not.  Most entertaining great quarterback ever?  I would say yes," said Pearlman.

Pearlman's book deals not only with Favre's on-field life, but also his relationships with his late father, his wife and Aaron Rodgers.