Braun appears at Brewers On Deck, still apologetic for cheating 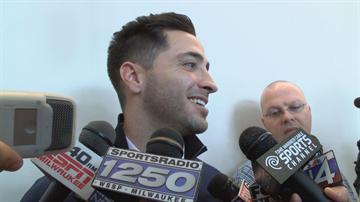 MILWAUKEE- On Sunday the annual \"Brewers On Deck\" event was held at the Wisconsin Center.

Ryan Braun made his first big public appearance at the event since being suspended by Major League Baseball last season for Performance Enhancing Drug use.

He played on a live game show with other Brewers representatives and interacted with fans.

Braun was still apologetic for his PED use and role in lying about it.

He said he was excited to be back after his \"extended off-season\" and that he's confident his play on the field will be the best it's ever been.

CBS 58 spoke with a number of fans who all agreed that they were happy to see Braun back.

The Brewers' slugger admitted that positive reception mattered to him.

He said he knows the reaction will likely be more hostile away from Miller Park this season, but he explained he likes that challenge.

Braun said, personally, this is the most excited he's been for a season.

When asked about Alex Rodriguez, Bruan didn't want to discuss that situation because he said he's not paying attention to it.

Rodriguez is the New York Yankees third baseman who was suspended by the MLB for the entire 2014 season for PED use and is linked to the same Biogenesis clinic in Miami.