Boy has first real birthday party, thanks to cops and Facebook friends 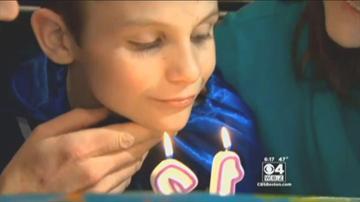 \"In the past we'd like take him out to ice cream or something,\" Logan's sister Cloey. \"But now it's like the big day for him.\"

\"As far as his birthdays in the past, they've always been a sad quiet day,\" said Logan's mom, Catherine, who decided to do something different for Logan's 12th birthday.

She turned to Facebook, asking for birthday cards and wishes. The post went viral and Logan wound up with thousands of messages, buckets of cards and a big fan at the Cambridge Police Department

\"(The post) was brought to my attention by my better half, my girlfriend,\" said Cambridge police officer Steven Bikofsky. \"When I realized he was in Andover, I knew he was a special boy and I figured we'd do something special for him.\"

Bikofsky organized a surprise birthday celebration complete with gifts, cake and a lot of cops. Police from 10 different departments across Massachusetts joined at a North Andover Fuddruckers to celebrate with Logan.

\"If it didn't tug at your heart strings, you didn't have a heart,\" said Andover police Lt. Edward Guy.

The soon-to-be-12-year-old arrived in style. His family's car was flanked by police cruisers.

\"It just exploded into this police escort to just show Logan how important he is,\" beamed Catherine. \"I just can't believe it.\"

Catherine said she feels humbled by the birthday party 12 years in the making. \"Logan is loved around the world, so it's not a sad birthday anymore.\"

Logan will officially turn 12 on Feb 24.