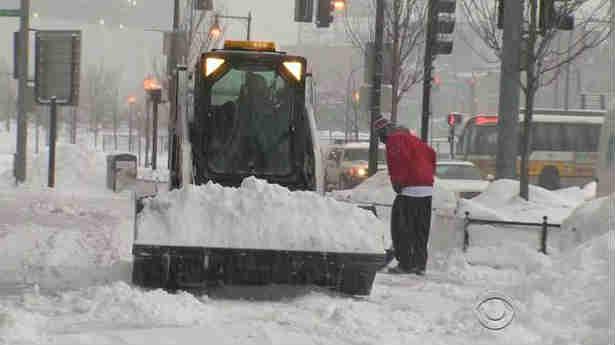 Another storm hit the Northeast Monday. Boston could have as much as two more feet of new snow before it's over. The city has not set a record with nearly 74 inches of snow this season.

Throughout the day, the flakes kept falling in Boston, quickly adding height to the mounds of snow everywhere around the city. Cars are buried, transit systems shut down and people like Joe Mulcahy were forced to either stay inside or dig out.

In the last two weeks, contractor Tom Morell has received more than 200 calls to his roofing business, from homeowners fearful that their roofs might cave in.

He says, on average, it takes \"the better part of a day\" to remove the snow from a big house.

Before the 600 snowplows can clear the streets from one snowstorm, it seems another piles on. The city's $18 million snow removal budget is already blown, says Mayor Marty Walsh.

\"By the end of this week, we will more than have doubled that budget from what the snow budget was,\" he said.

Over the last 24 hours, 6,000 tons of snow has been removed from city streets. Two snow melters are working non-stop. Since yesterday, they've melted more than 19,000 tons.

Boston public schools have had eight snow days this school year and officials are now considering having those students make up those missed days either this Spring or perhaps during the summer.