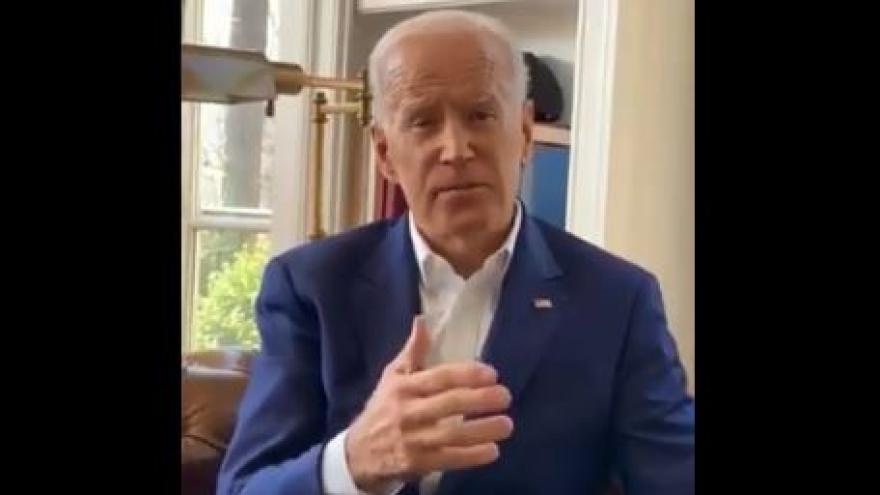 (CBSNews) -- In a two-minute video posted to Twitter, former Vice President Joe Biden promised to be more "respectful and mindful" of personal space. In the past few days, two women have accused Biden of touching them inappropriately, sparking a debate about the possible 2020 presidential candidate's behavior. The women allege that Biden — while he was vice president — made them feel uncomfortable at Democratic Party functions.

Sitting on a couch wearing a blue suit but no tie, Biden spoke to what appeared to be a smartphone camera directly, explaining how he had always treated politics as a personal affair.

"I'll always be direct with you. But today I want to talk about gestures of support and encouragement that I've made to women and some men that have made them uncomfortable," Biden said.

Social norms are changing. I understand that, and I’ve heard what these women are saying. Politics to me has always been about making connections, but I will be more mindful about respecting personal space in the future. That’s my responsibility and I will meet it. pic.twitter.com/Ya2mf5ODts

"In my career, I've always tried to make a human connection...I shake hands, I hug people, I grab men and women by the shoulders and saying, 'You can do this,'" Biden said, adding that "scores, if not hundreds" of people had come to him looking for some kind of support, justifying his tendency to embrace people.

"It's just who I am. And I've never thought of politics as cold and antiseptic, I've always thought of it [as] about connecting with people," he explained. However, he acknowledged that the definitions of what is considered socially acceptable behavior are changing.

"Social norms have become to change, they've shifted. And the boundaries of protecting personal space have been reset. And I get it," said Biden, who has been involved in politics for over 45 years. "I hear what they're saying. I understand it. And I'll be much more mindful. That's my responsibility. My responsibility, and I'll meet it."

While he still considers politics to be about personal connection, he said he "will be more mindful and respectful of people's personal space."

He ended the video with a response to detractors who criticized his over-friendly behavior.

"I've worked my whole life to empower women," Biden said. "So the idea that I can't adjust to the fact that personal space is important, more important than it's ever been, is just not thinkable."

Lucy Flores, a Democrat who served in the Nevada State Assembly, wrote a piece for New York Magazine's The Cut on Friday alleging that Biden "inhaled" her hair and then kissed her before a campaign rally in 2014, when she was pursuing a bid to be Nevada's lieutenant governor.

Soon after former congressional aide Amy Lappos told the Hartford Courant that Biden reached for her face and rubbed noses with her during a 2009 fundraiser in Greenwich, Connecticut.

The New York Times reported Tuesday night that two more women have accused Biden of touching that made them uncomfortable.

Biden is known for physically embracing people in public. But he said in a statement Sunday that he never believed he acted inappropriately.

"In my many years on the campaign trail and in public life, I have offered countless handshakes, hugs, expressions of affection, support and comfort," Biden's statement said. "And not once — never — did I believe I acted inappropriately. If it is suggested that I did so, I will listen respectfully. But it was never my intention."

Biden added that he "may not recall these moments the same way, and I may be surprised by what I hear. But we have arrived at an important time when women feel they can and should relate their experiences, and men should pay attention. And I will."

Biden's supporters, including several women, have been quick to defend the former vice president. A spokesperson for Biden also sent a list to reporters of quotes from women affirming their support.