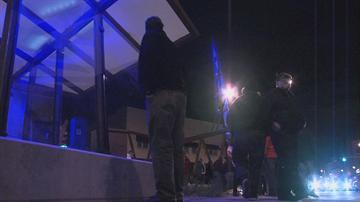 Despite the suddenly cooler temperatures, folks ventured out to see this public art bus shelter, that is power by completely 100 percent renewable energy.

While some might not understand it, supporters are convinced this will draw more visitors to a section of the city already known for arts and entertainment with an eclectic flair.

\"When we turn on the lights it's going to be powered by solar energy,\" Alderman Tony Zielinski tells CBS 58 News. \"It's completely off the grid, demonstrating our commitment to renewable energy in the future.\"

The Alderman said the support of Mayor Tom Barrett and County Board Supervisor Marina Dimitrijevic were vital to the project.

But he singled out the generosity of the estate of David Dombrowski Friday night.