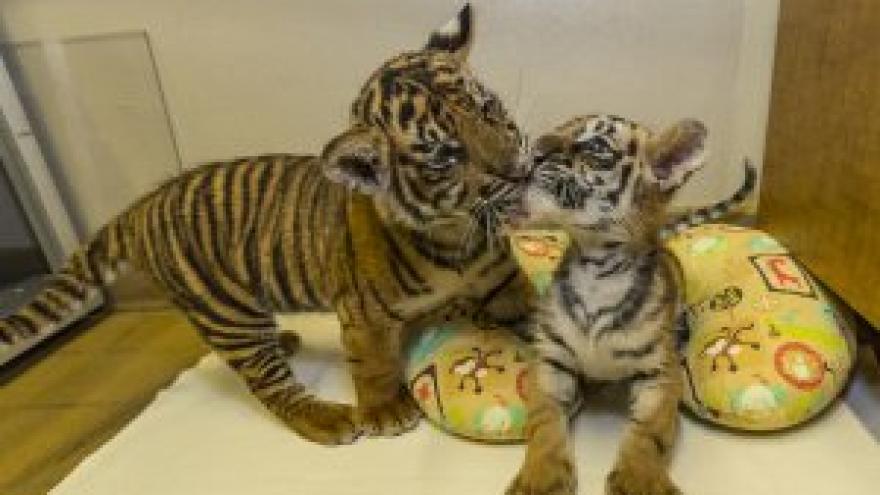 A baby tiger that was found when a teenager tried to smuggle it across the border from Mexico got a new playmate Monday: a 9-week-old endangered Sumatran tiger that was rejected by his mother.

The two cubs were introduced at the San Diego Zoo Safari Park, where their adorable tussling was recorded on video.

The new cub, a male, was flown in with his keepers from the Smithsonian’s National Zoo in Washington, D.C. He was born there July 11, but his mother began to display aggressive behavior toward him and the two were separated. The mother tiger, Damai, was on a breeding loan to the National Zoo from the San Diego Zoo, and has already displayed signs of going back into mating behavior.

The zoos determined together that the cub should be transferred to San Diego for care by keepers there.

“We knew we had one, similar age. We knew if the two were together, they’d do much better being raised together,” said Andy Blue, associate curator of mammals at the San Diego Zoo Safari Park.

The cub slept most of the way across the country to San Diego on a commercial flight.

The other cub, also a male and believed to be about 7 weeks old, was found during a vehicle inspection at the Otay Mesa border crossing on Aug. 23. Two days after being put into the care of the zoo, he was doing well. He is a Bengal tiger, also an endangered species.

Zoo officials initially planned to wait a few days to introduce the two cubs, but because the cub who arrived from D.C. showed no signs of stress, the pair got a brief period to visit together Monday afternoon. 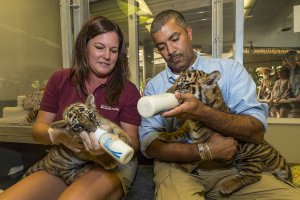 “Instantly, they bonded. You can see them playing, getting along well. It’s the best thing for both of them to be together,” Blue said.

Video showed them wrestling and licking each other.

They’re on the same bottle-feeding schedule since they’re of similar age, and are both beginning to eat meat, Blue said.

If all goes well, guests to the Safari Park will be able to see the cubs together through the nursery window at the Ione and Paul Harter Animal Care Center from 9 a.m. to 5 p.m. Tuesday.