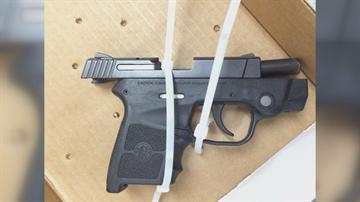 RACINE -- Police in Racine and Milwaukee say anonymous tip lines have played a big part in boosting the number of illegal guns confiscated this year.  But the totals are also giving us an alarming glimpse of just how many guns are out there.

\"We count on them and they know that,\" Racine Police Sergeant Jessie Metoyer said.

A beneficial relationship forming between Racine Police and the people they protect.

Sergeant Metoyer points to the number of illegal guns officers have taken off the streets as proof.  Through June 30, police captured 101 guns, including one Monday, carried by a convicted felon.  That's up nearly 70 percent from last year.

\"Increase in community members giving us solid information, calling right away when they see shot  fired incidents or suspicious people who they think have guns,\" Metoyer said.

Racine's anonymous Crime Stopper tip line and text services have been busy in 2014, helping police make more arrests after, what they call, a relatively violent spring and early summer.

\"There are a lot of guns out there,\" Metoyer said.  \"I think there's probably more out there right now than we've seen in other years.\"

In Milwaukee, police know just how true that is.

\"Our efforts to get illegal guns off the streets are unrelenting, notwithstanding the status of the hot line,\" Milwaukee Police Chief Ed Flynn said.

One month after Mayor Barrett announced his anonymous gun tip line, Flynn says that system has taken only 45 calls and hasn't lead to a substantial lead.  Still, MPD has confiscated about 30 percent more guns than this point last year.

\"Thirteen-hundred guns in a little more than six months is a lot of illegal firearms,\" Flynn said.  \"It gives you some indication of what our officers are up against.\"

Homicides are down in Milwaukee with four fewer than this point last year.  But, police in both cities agree more work needs to be done.

\"It's the one gun that's out there they just never know about and we'll never be comfortable with the number,\" Metoyer said.