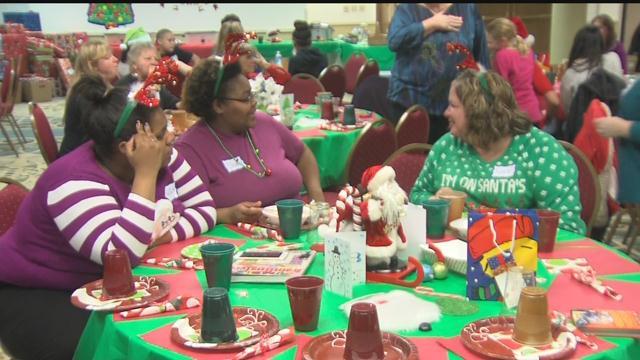 A hot meal and a chance to sleep in a real bed. For dozens of homeless people that happened Wednesday night at the Rodeway Inn on Milwaukee's south side.

The grassroots group "Angels Among Us" started by a woman who knows the struggles of life, Kristy Lynn, originally came up with the idea of a party with presents.

She says when word got around, including on the CBS 58 News a 4 p.m., it blossomed into an adopt a homeless person campaign where people donated about $30 dollars to secure a hotel stay.

CBS 58 got an exclusive invitation to attend the event.

Sachelle Saunders met a man named Toney who has been living in his car for the past two months.

His best friend, his dog, never leaving his side.

His spirits were lifted at the party as Christmas songs filled the air.

"I finally have been getting help that I need right now," said Toney.

Kaylaa purchased a room and is dog sitting so that Toney can have a good night's rest.

"He's like me and you," said Kaylaa. "He's just down on his luck and I'm just helping him out through the night, taking care of his dog and he's going to have a warm place to sleep. It just really makes me realize that what we have may not be the best, but it's good. Other people would be lucky to be in our situations."

The news got even better when after The CBS 58 News at 9 on "The M" broadcast a report about the party, a viewer turned up at the hotel and donated another ten rooms.

Toney will be one of the lucky guest staying for another night and Kaylaa has agreed to dog sit again.