MILWAUKEE (CBS 58) -- On Thursday the Milwaukee Police Department received a called tip which led them to the dumping suspect.

The man admitted to dumping and Milwaukee Police issued a $1,500 illegal dumping citation.

The City of Milwaukee thanks everyone for sharing the story and say it's proof that caring and committed residents can improve neighborhoods.

MILWAUKEE (CBS 58) -- The City of Milwaukee wants to hold one garbage dumper accountable after the suspect was caught on camera leaving junk on the side of the road and took off.

In Milwaukee, it's illegal to dump your unwanted belongings in the street, instead you're supposed to bring it to two different drop-off locations or have a private company pick it up for you.

“I would consider it to be an eye sore,” Memke said.

“This time of year everyone is getting out trying to clean out their basement and garages,” Lambert said.

Lambert said he and his crews see illegal dumping on their routes all the time.

“It causes litter, stuff starts blowing around and it looks bad in the neighborhoods,” Lambert said.

In just a quick drive on Milwaukee’s east side, CBS 58 saw two couches and a mattress on the road within a just couple blocks. The City of Milwaukee’s Department of Neighborhood Services said they won’t tolerate illegal dumping. Surveillance video from last week shows a man dumping two mattresses and a trunk bed full of other junk behind a garage on N 18th Street.

The Department of Neighborhood Services is hoping the surveillance video will help them find the suspect. If you know the person, or see any more illegal dumping, please call 414-286-CITY. 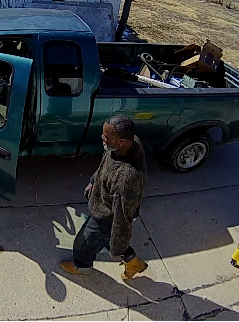 If you have junk to get rid of in Milwaukee, please bring it to either: