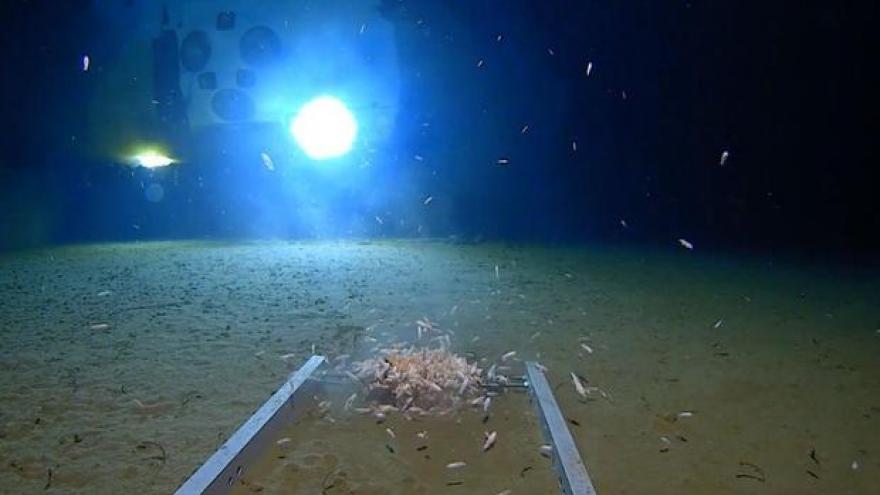 Vescovo\'s team believes they have found four new prawn-like species at the bottom of the Mariana Trench. They also found pollution. ATLANTIC PRODUCTIONS FOR DISCOVERY CHANNEL

An American diver broke the record for deepest submarine dive ever and found something disheartening at the bottom of the ocean – a plastic bag. Victor Vescovo traveled seven miles down to the deepest part of the ocean, Mariana Trench in the Pacific, BBC News reports.

During his four-hour excursion, Vescovo spotted new sea creatures – as well as a plastic bag and candy wrappers.

His team believes they discovered four new prawn-like species in total. They also saw a spoon worm, a pink snailfish, and a colored rocky outcrops, all inhabitants of the deep sea. In addition to the creatures, they discovered something that past expeditions have not: pollution. Humanity's impact had reached the deepest parts of the sea floor, too, the team realized.

The scientists plan on testing the creatures they collected to see if they contain microplastics. This is a widespread problem for sea creatures, even those living extremely deep in the ocean, a recent study has found.

"It is almost indescribable how excited all of us are about achieving what we just did," Vescovo told BBC News. "This submarine and its mother ship, along with its extraordinarily talented expedition team, took marine technology to a ridiculously higher new level by diving – rapidly and repeatedly – into the deepest, harshest, area of the ocean."

The team dove to the bottom of the Mariana Trench five times, BBC News reports. It was part of Vescovo's "Five Deeps expedition," his attempt to explore the deepest parts of all five oceans. Vescovo, a private equity investor, is funding the expeditions. Previously, he climbed the highest peaks on each of the planet's seven continents.

The first deep dive into the Mariana Trench was in 1960, when U.S. Navy Lieutenant Don Walsh and Swiss engineer Jacques Piccard ventured into the deep abyss of the Pacific Ocean.

In 2012, movie director James Cameron made a solo trip into the Mariana Trench.

The latest descent by Vescovo's team reached 35,849 feet beneath the waves, breaking the previous records by about 36 feet.

Vescovo has lead dives in the Atlantic's Puerto Rico Trench, the South Sandwich Trench and the Indian Ocean's Java Trench. Next, he will attempt to reach the bottom of the Arctic Ocean's Molloy Deep.

The extreme pressure and darkness make it extremely challenging to travel deep beneath the sea and capture images. The pressure at the bottom of the ocean is equal to about 50 jumbo jets piled on top of a person, according to BBC News.

When the Five Deeps expedition is complete, the researchers plan to pass their findings onto science institutions, which will continued to use their information for studies.

Deep sea dives have proven that areas thought to be remote and desolate are actually filled with life – and apparently, pollution. There is also growing evidence that they are "carbon sinks," or natural environments that store carbon, which play a role in regulating the Earth's climate.