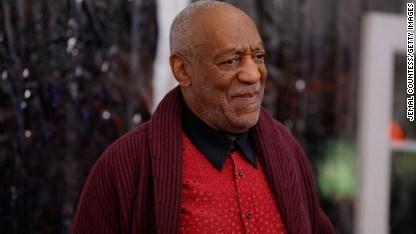 For decades, Cosby was thought of in glowing terms as a perceptive comedian, upbeat pitchman and genial father figure. His public personality made him more than rich -- it made him a role model, admired for his support of education and his no-nonsense talks on parenting and achievement.

In recent weeks, that persona has been paired with another, much darker image.

On Tuesday, the famed comedian and TV star was accused of rape by Janice Dickinson, a former model. In an interview on \"Entertainment Tonight,\" Dickinson claimed Cosby assaulted her in 1982 after the two had dinner in Lake Tahoe.

Cosby attorney Marty Singer was blunt in his response.

\"Janice Dickinson's story accusing Bill Cosby of rape is a lie,\" he told CNN in a statement. \"There is a glaring contradiction between what she is claiming now for the first time and what she wrote in her own book and what she told the media back in 2002. Ms. Dickinson did an interview with the New York Observer in September 2002 entitled 'Interview With a Vamp' completely contradicting her new story about Mr. Cosby.

\"That interview a dozen years ago said 'she didn't want to go to bed with him and he blew her off.' Her publisher HarperCollins can confirm that no attorney representing Mr. Cosby tried to kill the alleged rape story (since there was no such story) or tried to prevent her from saying whatever she wanted about Bill Cosby in her book.\"

He added, \"Documentary proof and Ms. Dickinson's own words show that her new story about something she now claims happened back in 1982 is a fabricated lie.\"

Dickinson's allegations come on the heels of other rape accusations. Cosby has repeatedly said the allegations are untrue. He has never been prosecuted.

Over the weekend, Cosby was asked about \"serious allegations raised about you\" by NPR's Scott Simon.

\"Do you have any response to those charges?\" Simon asked.

In response, Cosby shook his head in silence.

On Sunday, Cosby attorney John P. Schmitt released a written statement. \"Over the last several weeks, decade-old, discredited allegations against Mr. Cosby have resurfaced,\" Schmitt said. \"The fact that they are being repeated does not make them true. Mr. Cosby does not intend to dignify these allegations with any comment.\"

The accusations have received wide publicity in recent weeks, spurred in particular by two events: a viral video of comedian Hannibal Buress in which he called Cosby a \"rapist,\" and an attempt to create a Cosby meme sponsored by Cosby's Twitter account. The latter led to many images of Cosby with the rape accusations emblazoned over his picture.

The events detailed by Cosby's accusers took place over many decades. Five women have gone on record in describing them. Another woman, Andrea Constand, approached Montgomery County, Pennsylvania, authorities in 2005, but prosecutors decided they had \"insufficient credible and admissible evidence.\"

\"The desire on our part to move forward was pretty strong,\" Bruce Castor, then the Montgomery County district attorney, told CNN's \"New Day\" on Wednesday. \"The problem with the case was she waited a year until she told police about it.\"

Constand later filed a civil suit. Her lawyers said they found 13 Jane Doe witnesses with similar stories. However, Constand's suit was settled in November 2006, and the witnesses were never called. Terms have not been disclosed.

Here are details on the other five named women:

Who was: a 19-year-old actress

At the time, Cosby was: a year removed from his hit TV series, \"I Spy,\" starting work on a new sitcom, \"The Bill Cosby Show,\" and one of the most popular comedians in America. His 1968 album, \"To Russell, My Brother, Whom I Slept With,\" had won a Grammy as best comedy performance in March -- Cosby's fifth straight win in the category.

The accusation: Tarshis, who later became a journalist and music industry publicist, said she met Cosby while visiting Los Angeles. The two became friendly. One night after a taping of his sitcom, he invited her back to his bungalow and fixed her a \"redeye\" (a Bloody Mary topped with beer, her regular drink).

\"The next thing I remember was coming to on his couch while being undressed,\" she told Hollywood Elsewhere. \"I was sickened by what was happening to me and shocked that this man I had idolized was now raping me. Of course I told no one.\" It was the first of two incidents, Tarshis said.

Who was: an aspiring model in her early 20s

At the time, Cosby was: starring on \"The Bill Cosby Show.\" A year later, he would start guesting on the children's program \"The Electric Company.\"

The accusation: Green, who later became an attorney, said she met Cosby at a working lunch with several other people. She was suffering from the flu and Cosby \"went into some sort of office area at the back of the restaurant and he produced two capsules in his hand,\" she told the \"Today Show's\" Matt Lauer. She took the capsules, which at first made her feel \"great\" and then left her \"almost literally face down on the table of this restaurant.\"

Cosby took her to her apartment and started \"groping me and kissing me and touching me and handling me and you know, taking off my clothes,\" Green said. After telling Cosby \"that if he didn't kill me and he tried to rape me, it was going to go very badly,\" he left two $100 bills on her coffee table and left.

When Green went public, a lawyer for Cosby told \"Today,\" \"Miss Green's allegations are absolutely false. Mr. Cosby does not know the name Tamara Green or (maiden name) Tamara Lucier, and the incident she describes did not happen. The fact that she may have repeated this story to others is not corroboration.\"

Who was: a noted model

At the time, Cosby was: touring as a comedian and well-known for his Jell-O and Coca-Cola commercials.

The accusation: Dickinson says that she and Cosby had dinner in Lake Tahoe, Nevada, and he gave her a glass of red wine and a pill she believed was for menstrual cramps. \"The last thing I remember was Bill Cosby in a patchwork robe, dropping his robe and getting on top of me. And I remember a lot of pain,\" she told \"Entertainment Tonight.\"

Dickinson said she wanted to write about the incident in her 2002 memoir \"No Lifeguard on Duty,\" but said Cosby's lawyers told her to remove details.

Marty Singer, the Cosby attorney, told TheWrap.com that her claim is untrue. \"(N)either Mr. Cosby or any of his representatives ever communication (sic) with the publisher about any alleged rape or sexual assault about the book,\" he said.

At the time, Cosby was: a touring comedian, advertising pitchman and, starting in 1984, the star of \"The Cosby Show,\" the No. 1 show on television.

The accusation: Ferrier told the Philadelphia Daily News and People magazine that she met Cosby in Denver in the mid-'80s. He mentored her for a time but, one night, she said he gave her a drugged cappuccino. \"I woke up in my car in the parking lot with my clothes all a mess,\" she said. \"I wondered, I still wonder, 'What did he do with me? Why was my bra unhooked?' \"

The two later conducted an \"on-and-off consensual affair\" that lasted several years, wrote People's Alex Tresniowski. \"He kept luring me in,\" Ferrier told the magazine. \"I felt like I couldn't say no.\"

At the time, Cosby's publicist told People that he had no comment.

Who was: a teenage model and actress

At the time, Cosby was: starring in \"The Cosby Show.\"

The accusation: In 1985, Cosby met the then 17-year-old Bowman in Denver and visited her a number of times, giving her acting lessons and \"flying me around to major cities to events,\" she told Newsweek. After she turned 18, Cosby \"assaulted (me) a number of times.\" In an incident in New York, Bowman \"had one glass of wine and then I blacked out. I woke up throwing up in the toilet. ... I was wearing a white T-shirt that wasn't mine, and he was in a white robe.\"

In an incident in Atlantic City, an angry Cosby \"got on top of me and started taking his pants off and I was screaming and crying and begging him to leave me alone and I fought so hard and I was screaming so loud that he got mad and threw me aside and got away from me, and that was it.\"

The statement of Cosby attorney Schmitt, released Sunday, said, \"Over the last several weeks, decade-old, discredited allegations against Mr. Cosby have resurfaced. The fact that they are being repeated does not make them true. Mr. Cosby does not intend to dignify these allegations with any comment.\"

When she went public: 2006. She has since written a Washington Post column published November 13.