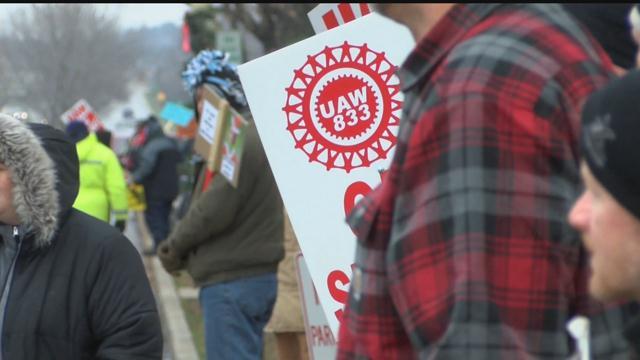 The Kohler union workers ratified the contract and ended the strike.

According to CBS 58's Sachelle Saunders who was at the vote, 91% voted in favor of new Kohler contract. The workers will be back to work on Thursday.

A possible deal is in the works for employees at Kohler in Sheboygan County.

Hundreds have been on strike for more than a month. A vote on Wednesday night could bring that to an end.

And just in time for Christmas.

Specifics on the plan will come out after the vote, but what we do know at this point is that wage increase is in the mix. And an apparent concession the two tiered employee payment system will remain, but the gap is smaller than it was before.

There is still evidence of the strike outside of Kohler Company's main entrances like the heating huts and muddy footprints in the grass from more than a month of picketing.

It could continue only until tonight. In a joint-press release UAW local 833's President and Kohler Company's President and CEO announced they had reached a tenative agreement. Union official are recommending approval.

This year the group awarded Kohler the title "economic driver of the year".

The ceremony happened one week after workers voted to strike.

He talks about balance between the company, the community, and the workers and said everyone is fortunate the strike isn't dragging on.

About 2,000 employees have been a part of the work stoppage which started exactly one month ago. If workers vote in favor of the new contract they are scheduled to return to work tomorrow morning.