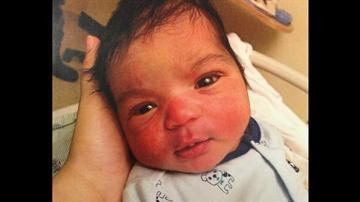 BELOIT-Authorities released the 9-1-1 calls that came in from the mother of a missing newborn.

A frantic and crying Brianna Powell says repeatedly that her son, Kayden, was not in his bassinet.

The dispatcher methodically asks for details to keep her on the line and try to keep her calm.

30 hours later the boy was found, incredibly in good health after being left in a duffle bag outside an Iowa gas station.

The mother's half sister is charged with the kidnapping.

For the first time, there's mention of a weapon at the abduction site, the home where the baby lived.

Brianna: \"There was a knife laying next to my bed.

Dispatch: There was a knife laying next to your bed?

Dispatch: Is there any blood on the knife?

Brianna: No. I picked it up and see it was a knife and then I threw it back down and looked over. My baby was gone.\"

At last report the child, mother and father were together and resting at a relative's home in Chicago.