2 hurt in fight at youth basketball tournament in Germantown

NOW: 2 hurt in fight at youth basketball tournament in Germantown

GERMANTOWN, Wis. (CBS 58) – Two men were hurt after a fight broke out a girls basketball tournament in Germantown Wednesday, July 22. Police say they're still investigating the incident which was all caught on video.

The fight happened at Germantown High School during a game between a Milwaukee-based team and a team from the Appleton area.

Germantown police say they were called to the high school around 2:15 p.m. Wednesday. Once they got to the scene, the fight was over.

The coach of the Milwaukee team says it all started when the brother of one of his players was asked to leave by the referees. He says that's when one of the coaches from the Wisconsin Blizzard said something to the brother. From there, the situation escalated.

The coach of the Milwaukee team says he doesn't know who threw the first punch, but the family of the Blizzard father-son coaching duo say they were hit first.

The entire situation can be seen in the surveillance video below:

"I can give you the first punch, maybe someone comes from behind you, you turn to swing as a natural reaction, but as that punch is in flight, you know what you’re hitting, and after that he went after her again," said Daryl Bates, Playground Elite U-15 head coach.

The family of the coaches say the girl wasn't actually hit. The Wisconsin Blizzard released the following statement saying in part, they don't condone any sort of violence on or off the court. The statement goes on to say their coach was hit first, and when the coach swung at the player, he didn't know if he was swinging at a man or a woman. 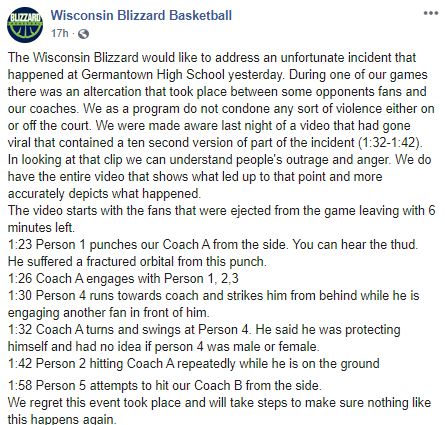 "There’s blame on both sides for sure," Bates said.

The two Blizzard coaches were taken to the hospital; one has a broken eye socket and the other had to get stitches on his face.

The remainder of the basketball tournament was canceled, according to police.

Germantown police say there were around ten people involved in the fight and an investigation is ongoing.

"On Wednesday, July 22nd there was an incident at an AAU basketball tournament. The incident is still under investigation by the Germantown Police Department. An outside group rented the Germantown High School field house for this tournament and all parties involved in the incident were not Germantown students, parents or staff, but visitors to our community. It is of the understanding that the parties involved were from Milwaukee and Appleton. One student and up to ten adults were involved in a fight that caused two coaches to require medical attention. This was a two-day tournament, however, the second day was cancelled by the superintendent of schools in consultation with the tournament organizer. As a district and community, we are disgusted with the behaviors and actions that occurred at this youth basketball event."