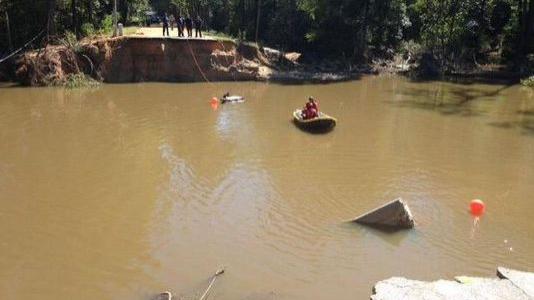 Two more bodies were found in the Carolinas -- bringing the death toll from the worst flooding there on record to at least 19.

In South Carolina, 14 dams have failed since the weekend.

Drastic measures are being taken to stop rising floodwaters. The military is taking action.

The bags are being used to build a barrier because the Columbia Canal has breached and is jeopardizing the water supply for more than 350,000 people.

When asked how long it will be before the canal is temporarily shored up, the director of the South Carolina State Emergency Management Division Kim Stenson said "I think in the next day or so they should be able to do that."

SCEMD and FEMA are both monitoring flood water that is flowing east, and threatening to breach 62 other dams in the state.

South Carolina Gov. Haley was asked if she takes exception to a local newspaper calling the dam safety "flawed."

"I think there will be a lot of people with a lot of opinions. What I will tell you is this is a thousand-year flood and we have thousands of dams in this state. There will be time later to talk about how we could've done better," Haley said.

The death toll in the Carolinas was raised to 19 when the bodies of two railroad workers were recovered Wed. morning. They were in a pick-up truck that drove around a barricade and plunged off a washed-out road. Three other men in the truck survived.

Flood waters are expected to rise for another 48 hours and authorities in Charleston remain on alert.