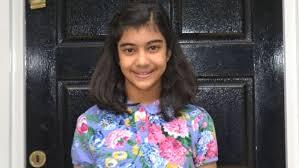 (CNN)A 12-year-old girl who had an inkling she might be quite clever has taken a test and proved she was absolutely right.

Lydia Sebastian achieved the top score of 162 on Mensa's Cattell III B paper, suggesting she has a higher IQ than well-known geniuses Albert Einstein and Stephen Hawking.

The comparison doesn't sit well with the British student, who's currently in Year 8 at Colchester County high school, a selective girl's grammar school in Essex, England.

\"I don't think I can be compared to such great intellectuals such as Albert Einstein and Stephen Hawking. They've achieved so much. I don't think it's right,\" Lydia told CNN.

Lydia sat the test in her summer holidays, after raising the idea with her parents and pestering them for the best part of a year.

It turns out the test wasn't that hard after all.

Lydia's not quite sure what she wants to do when she leaves school, although she's leaning toward something \"based around maths, because it's one of my favorite subjects.\"

To put Lydia's mark in perspective, the top adult score in the Cattell III B test, which primarily tests verbal reasoning, is 161. A top 2% score -- which allows entry to Mensa, the club for those with high IQs -- would be 148 or over. Lydia scored 162, placing her in the top 1% of the population.

If you think you may have what it takes, try a few puzzles below, courtesy of British Mensa.

The summer sale began and a further 85 t-shirts were sold at a reduced price.

The average amount paid for each tee shirt over the whole time was £6.

What was the sale price?

2. A question of marks

What number should replace the question mark?

If Neil and Diane grow leeks,

and Jacob and Chloe grow beans.

Do Tom and Andrea grow courgettes or marrows?