"You Can't Give Up"; Billboards Raise Awareness for Missing Persons 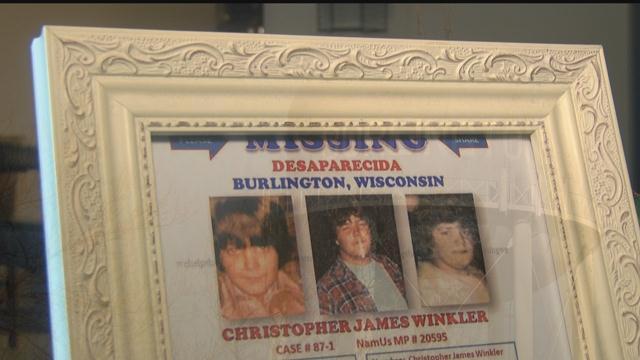 It's been nearly 30 years since Christopher Winkler mysteriously vanished from his Burlington neighborhood.

Many have speculated about what happened to the 19-year-old, and decades later, his family continues to search for answers.

"It's very draining," says his Niece Jenna Winkler. "My grandma searched for him until the day she passed."

It's a story that's not unfamiliar to families in Wisconsin. State-wide, there are roughly 136 open missing persons cases.

"Everybody thinks it could never happen to them," says Winkler. "That doesn't happen here. Well, it happens."

Sharing his missing poster and other information has been difficult, but that's about to change.

A Green Bay woman named Marsha Loritz, is spear-heading a campaign to list every missing person on a billboard across the state. Her mother, Victoria Prokopovitz, went missing 3 years ago.

When she asked Lamar advertising how much the signs would cost, she received a nice surprise. Lamar offered to provide space on 25 billboards free of charge for the entire month.

"Somebody knows something," says Winkler. "And if they're seeing the names on the billboard, or they're hearing people talk about it, they're going to realize we're not forgetting, and we're not going to forget."

Loritz and the impacted families hope to add pictures next year.

"A lot of times people see the picture and if there's a missing person out there," says Tonya Fonseca. "They might recognize them. It might be one step closer to bringing some of these people home."

"The pictures would make it that much better, because maybe not all of these people are passed, maybe they were kidnapped or still out there, and you're going to see them in that picture."

The group is hoping to raise money for the future billboards through a gofundme page.