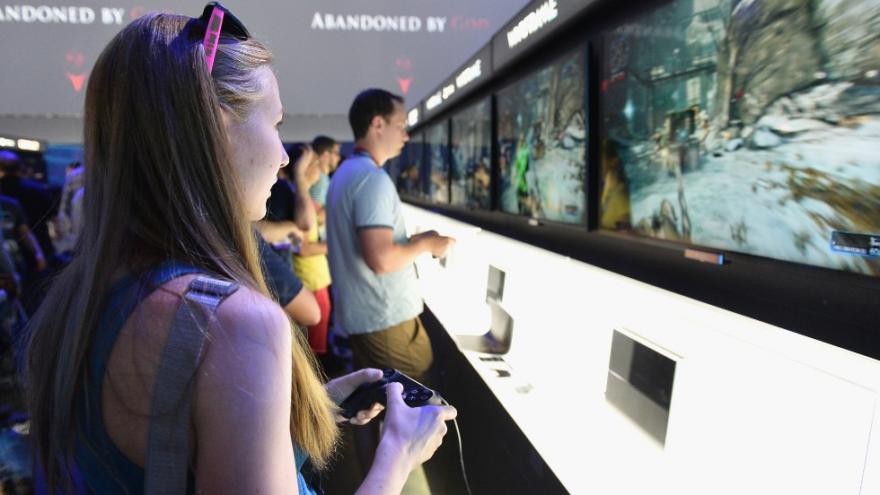 (CNN) In 2018, playing video games obsessively might lead to a diagnosis of a mental health disorder.

In the beta draft of its forthcoming 11th International Classification of Diseases, the World Health Organization includes "gaming disorder" in its list of mental health conditions. The WHO defines the disorder as a "persistent or recurrent" behavior pattern of "sufficient severity to result in significant impairment in personal, family, social, educational, occupational or other important areas of functioning."

The disorder is characterized by "impaired control" with increasing priority given to gaming and "escalation," despite "negative consequences."

Video game playing, either online or offline, must be "normally evident over a period of at least 12 months" for this diagnosis to be made, according to the beta draft guidance. However, if symptoms are severe and all requirements are met, health care professionals may include people who have been playing for shorter periods of time, the draft reads.

Gregory Hartl, a spokesman for the WHO, said the new ICD-11 entry on gaming disorder "includes only a clinical description and not prevention and treatment options."

A guide to diagnose and categorize

Hartl described the ICD as the "basis for identification of health trends and statistics globally and the international standard for reporting diseases and health conditions. It is used by medical practitioners around the world to diagnose conditions and by researchers to categorize conditions."

This comprehensive list is intended to make it easier for scientists to share and compare health information between hospitals, regions and countries. It also enables health care workers to compare data in the same location over different time periods. Additionally, public health experts use the ICD to track the number of deaths and diseases.

"Inclusion of a disorder in ICD is a consideration which countries take into account when making decisions on provision of health care and allocation of resources for prevention, treatment and rehabilitation," Hartl said. By adding "gaming disorder" to the ICD, the WHO makes this health condition an official diagnosis that can be used by health care workers, including doctors.

Chris Ferguson, a professor of psychology at Stetson University in Florida whose research interests include video games and other media violence effects, described the ICD as "the book of real diseases that you can get insurance payments for."

"People who have treatment centers for video game addiction or a gaming disorder will now be able to get reimbursed," said Ferguson. "In the past, they have not. It will be a financial boon for those centers."

The WHO's ICD lists both mental and physical disorders. The Diagnostic and Statistical Manual of Mental Disorders, Fifth Edition, or DSM-5 is the most recent manual produced by the American Psychiatric Association, and includes only mental disorders.

According to Ferguson, the DSM has entered "Internet Gaming Disorder" as a proposed category, "which means it's not an official diagnosis yet but they're interested and they want people to do research."

But the two guides take a different approach to gaming disorders.

This difference in opinion is equivalent to each of these authoritative books listing very different symptoms for pneumonia, he said. The Psychiatric Association and the WHO "don't like to be too far apart" in their descriptions of mental disorders, he said.

"Internet gaming disorder," as described by the Psychiatric Association, has been "very, very heavily criticized," said Ferguson, noting a paper published last year in the journal Addiction that he co-authored with dozens of researchers from around the world.

The DSM version of gaming disorder is built around substance abuse disorder, explained Ferguson. By contrast, the WHO version is built around whether gaming interferes with real life activities -- for example, if your gaming means you're not doing homework or brushing your teeth -- and so it is "perhaps a little bit better," said Ferguson.

"I don't think that the WHO's proposal is reflecting a real consensus in the field," said Ferguson, pointing to an open access debate among scholars.

"Some people agree with it, but a lot of us don't," he said.

Among those who agree is Douglas A. Gentile, a professor of psychology at Iowa State University who believes the inclusion of gaming disorder in the ICD-11 "will generate a lot more discussion about what's the best way to define it" and also "what's the best way to treat it." This would be "a good thing," he said.

Gentile has studied gaming disorder since 1999 and "at that time I was trying to show that it wasn't a problem," he said. "And the more I studied it, the more it looked like some people had a problem."

Almost all disorders are defined by their dysfunctionality, he explained. When it comes to addictions, the DSM doesn't ask how much you do something, such as drinking alcohol.

"It's about doing it in a way that damages your life," said Gentile. While some people can drink most of the time with no problems, others can drink rarely, yet do so in a way that causes a lot of damage. They get "so far out of balance, they need external help to get back into balance."

Ferguson believes that it would have been better if the WHO had taken more time and reached out to skeptical scholars, gamers themselves, some of the companies that make games -- all the invested stakeholders --- before formulating their description of gaming disorder.

And he questions whether it is really a disorder, or symptomatic of another mental disorder.

"After 20 or 30 years of this, the evidence base is not really good to suggest that this is a unique disorder -- the evidence base really to my mind suggests that this is, if anything, symptomatic of an underlying problem that people might be having," said Ferguson. For instance, studies show that gaming disorder tends to be unstable -- if you test someone twice, six months apart, the second test shows no disorder.

If it is just a symptom, then treating gaming disorder "really could do damage" in that it distracts doctors from the real underlying problem, said Ferguson. "It's like treating someone with pneumonia with a cough suppressant -- you'd get rid of the cough but they're still gonna have pneumonia."

Gentile argues that by the time gaming disorder has become a serious problem, it usually is connected to other problems. And those new ones start to make the original one worse and it all becomes a "jumbled mess."

In one study, he found that when kids stopped being addicted to games, their depression and anxiety got better.

"These are co-morbid conditions," he said. "If you just treat the depression and not gaming, the gaming is likely to come back." This suggests it's a unique condition, he said.

But Ferguson argued that, if it is a disorder, it seems to be very rare. The numbers cited in the best of studies say that about 1% -- or less -- of individuals who are gamers "have anything that looks like this type of disorder," he said, and even that's unclear.

"There are people out there who overdo video games," Ferguson said, "but people overdo lots of stuff, so why games? Why not just have a general behavioral addiction category that can apply to anything that people overdo?"

WHO's Hartl said that "use of the internet, computers, smartphones and other electronic devices has dramatically increased over recent decades," and while there are clear benefits, "health problems as a result of excessive use have also been documented." He added there is "increasing demand for treatment in different parts of the world."