"Wonder Woman" grosses most for female director in opening weekend ever 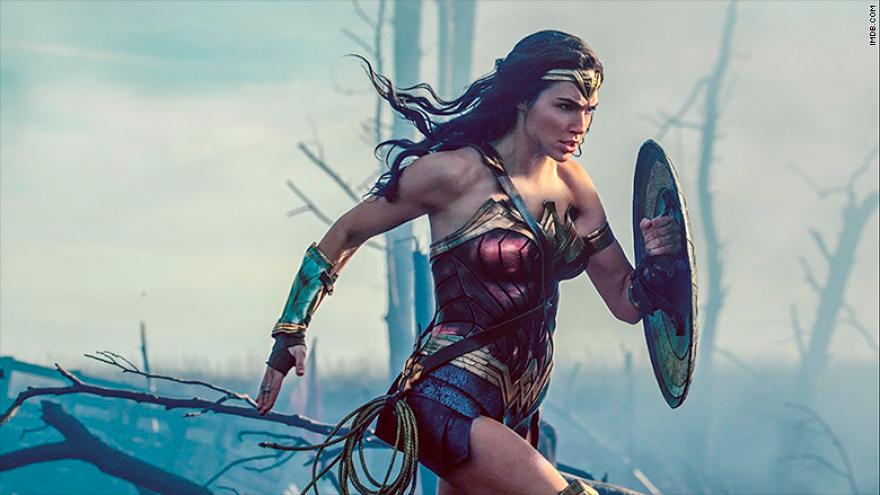 (AP) — "Wonder Woman" conquered milestones and movie myths at North American theaters, where the Patty Jenkins-directed superhero film powered its way to a $100.5 million debut this weekend and became the biggest blockbuster ever directed by a woman.

The well-reviewed movie easily surpassed industry expectations with one of the summer's biggest debuts, according to studio estimates Sunday. Starring Gal Gadot as the Amazonian warrior princess, "Wonder Woman" is the rare — and most successful — female-led film in an overwhelmingly male superhero landscape.

It proved a hit with moviegoers, earning a CinemaScore of A. While skewing somewhat female, it drew a fairly evenly split audience. Warner Bros. said 52 percent of the audience was female and 48 percent male. "Wonder Woman" added $122.5 million internationally, including $38 million in China.

"It shows that superhero movies aren't just about men. They're about women as well," said Jeff Goldstein, distribution chief for Warner Bros. "All the noise about Patty Jenkins breaking the glass ceiling for directors, I think that added to it as well."

Women have long struggled to get behind the camera of Hollywood's biggest productions. Female directors accounted for just 9 percent of the 250 top-grossing movies in North America in 2015 and only 7 percent in 2016.

Some still had issues with "Wonder Woman." Online critics complained of gender inequality after the Alamo Drafthouse scheduled a handful of female-only screenings across the country. Lebanon banned the film because Gadot is Israeli.

Nevertheless, "Wonder Woman" represents a turning point for Warner Bros. and DC Comics, which have together struggled in recent years to match the Marvel-Disney juggernaut. While "Wonder Woman" didn't match the box-office might of "Batman v. Superman" (a $166 million opening) or "Suicide Squad" ($133.7 million), it was much better received than those roundly derided releases.

"This is a dramatic step in the right direction," Goldstein said. "We've heard fans. We've heard critics. These properties are very complicated and beloved. To get it right, it takes a lot of work. I think on this movie, all of us got it right."

Last week's top film, "Pirates of the Caribbean: Dead Men Tell No Tales," slid dramatically to $21.6 million in its second week. It landed in third place, behind Fox's "Captain Underpants: The First Epic Movie." The animated release, in which a pair of students make their principal think he's a superhero by hypnotizing him, opened with $23.5 million.

But "Pirates" still sails well overseas. It's made $386.6 million internationally, driving the Disney sequel to more than $500 million globally.

The success of "Wonder Woman" gave the summer box office a much-needed charge. Thus far, the season's only blockbuster has been its first: "Guardians of the Galaxy Vol. 2." It has made $355.5 million in North America and $816.6 million worldwide.

"Wonder Woman," though, pushed the week's box office up 30 percent over the same week last year, according to comScore.

"This saves the day, at least for now, for the summer box office," said Paul Dergarabedian, senior media analyst for comScore. "Heading into this weekend, the summer movie season was down about 9 percent, and that deficit has been cut by about half in this one weekend."

Estimated ticket sales for Friday through Sunday at U.S. and Canadian theaters, according to comScore. Where available, the latest international numbers also are included. Final domestic figures will be released Monday.