Woman's car vandalized, then ticketed by City of Milwaukee 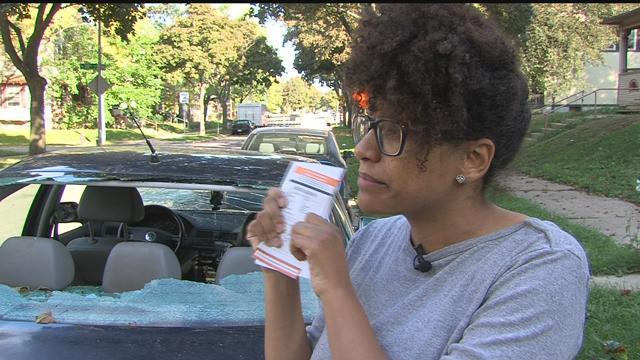 Brianna Kilgore couldn't believe what she woke up to on Saturday morning.

"You can see there's two different points of contact, busted the front," she said. "There's like a little scratch here, so they tried to bust this window."

She believes it's the work of a baseball bat that busted and smashed the windows on her 2001 Jetta, leaving glass on the inside and out.

Kilgore said karma will get whoever did it. If not that, she hopes her neighbor's security cameras will.

Tuesday afternoon, Kilgore told CBS 58 that nothing was stolen from inside her car, but she's thankful her car seat wasn't in the back. She's eight months pregnant.

"The baby could come at any moment and you have to have a car seat to take the baby home," she said.

It's alternate side parking rules in Kilgore's neighborhood, meaning on odd days, residents have to park on the odd-numbered side of the street. It's the same rule on even-numbered days.

Too dangerous to clean out her car or even drive it, Kilgore called Milwaukee's parking enforcement Monday night in hopes of avoiding a ticket.

"Whoever I spoke to said they couldn't [help]," she said.

The next morning, there was a ticket in the hood of her car. The officer who wrote the citation didn't even want touch the banged up windshield filled with glass.

"Like I preempted this ticket," she said. "I let them know I shouldn't be getting a parking ticket because I can't move my car, but they don't care. All they care about is getting their money."

It's money Kilgore needs to fix her car, which is the only unexpected surprise she plans to pay for.

"Obviously the city's hurting for $20 from me, so, uh you're not gonna get it though," she said.

Kilgore is fighting the ticket. The city's parking services department is investigating and could make an exception in her case.

Update: Based on the unique set of circumstances, DPW's Parking Services Department has decided to dismiss Kilgore's citation.